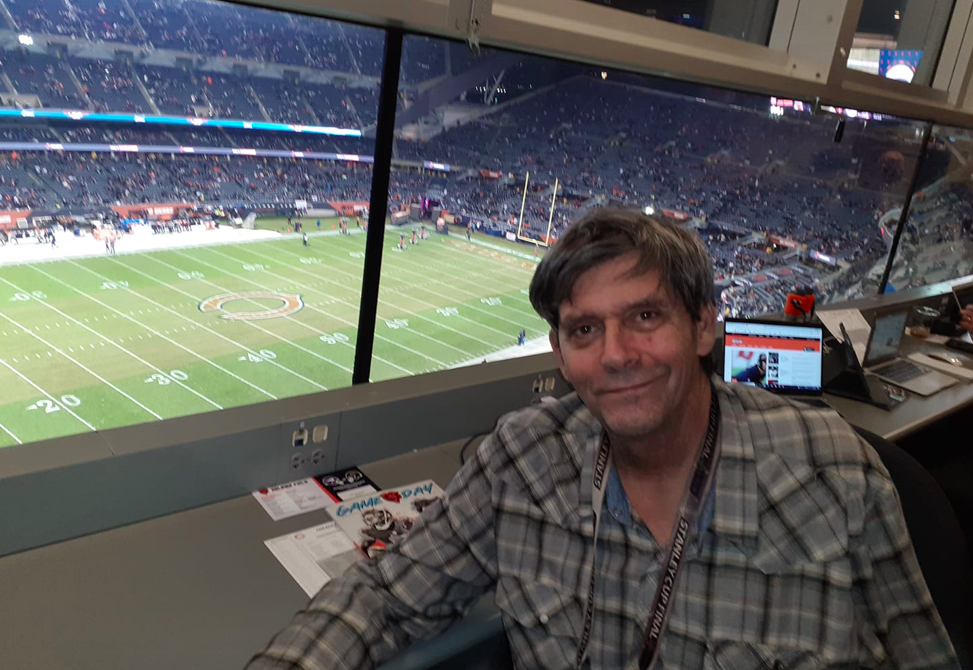 The death of veteran Chicago radio sportscaster Les Grobstein elicited an outpouring of tributes and recollections from media colleagues Monday.

Grobstein, 69, who died Sunday at his home in Elk Grove Village, was remembered for his five-decade career on the air here, including the last 12 years as overnight host on Audacy sports/talk WSCR 670-AM. He also was remembered for a lot more.

Among hundreds of comments on this blog and various social media platforms, here's a sampling of reactions from Grobstein's colleagues:

George Castle: Wayyy back in 1969, Les staged a cancer benefit game at Thillens Stadium in honor of his grandmother. He was just 17, right out of Von Steuben. He called the Cubs and Chuck Shriver, and amazingly landed Ernie Banks and Fergie Jenkins to appear at the benefit. Fergie actually pitched two innings. The next day, in his scheduled start, Fergie was racked up by the Mets at Wrigley Field. Couldn't happen like that today. That was the Proto-Les!

Tommy Edwards: My family is still in shock over Les Grobstein’s passing. We have so many memories of him and the WLS 89ers. He was kind, thoughtful and he cared so deeply about the sports he covered. His memory was remarkable. And he was a very good friend to my family. RIP, old friend.

John Gehron: I was stunned to hear the news. He was such a part of WLS history. I was always amazed by his memory for sports events.

Mark Giangreco: Les Grobstein was an eccentric savant with astounding total recall. Armed with that archaic mic, Les captured every sound bite of Chicago sports history. A constant, a fixture. We always celebrated the distinction of being the only ones to get Lee Elia’s infamous rant. RIP Grobber

Laurence Holmes: The first year of my Score career was spent as the overnight producer. I grew up a Steve and Garry fan, so the idea of working with Les Grobstein was a dream. I had a lot of ideas and energy. Les let me explore them. How he treated me was the template for how I treat producers. . . . Once he saw how serious I was about the show, he gave me a chance to be on the air. That changed my life.

Mick Kahler: As a producer for Larry Lujack at WLS I had the true honor of working with and knowing Les Grobstein. Nobody was more passionate and had a deeper "Rain Man"-like knowledge of all sports than Les. He was great and rolled with everything Larry pitched his way. Same goes for the rapport he had with Steve and Garry, and of course his overnight work on The Score was admired.

Gary Lee: When we started the first traffic service in 1978, I prepared a test of Chicagoland expressways, streets and towns for traffic reporter applicants. Shadow Traffic was sharing studio space with SportsPhone and Les Grobstein asked if he could take the test. Perfect score – only one out of over 30 applicants. I immediately offered him a job. Thankfully for all of us, he declined, staying with sports. However, the traffic test was a good indication of the Grobber’s knowledge and love of Chicago – not just Chicago sports. Great guy.

Mike Leiderman: Les Grobstein gone? Impossible. Les was eternal; a unique part of the Chicago sports landscape for so many years. Find a stat, a game, a player he didn't know, a scene he couldn't re-create, a sports argument he couldn't join? No way, no how. If ever there was a perfect place for someone in talk radio, it was Les doing overnights on The Score. He was so rare a personality - no cynicism at all. He could take the kidding - everything from his wardrobe to his penchant for press box food to "Rain Man" references - and laugh it all off. Rest well, Les. Enjoy all those sports debates at The Big Yakker in the Sky. We'll sure miss you down here. God Bless.

Kevin Matthews: Les was special, very special. His knowledge of all sports can’t be touched. What I loved most about Les was his sense of humor. He and Jim Shorts sure made great radio. My deepest prayers to his family and to The Score radio family, especially Mitch Michael Rosen. Les was one of the greats who made other greats better. Les Grobstein worked with everyone in Chicago. He deserves to enter the Radio Hall of Fame. In my opinion, he already did decades ago. Enjoy the dugout in Heaven, Les.

Corey McPherrin: The man was ALWAYS there. On the air. At the game. In the press box. In the locker room. Just mind boggling. For the big stuff. And the mundane. Always a pleasure to be around. Legend? A term used way too often. But for Les it fits. #RIPGrobber

Kenny McReynolds: He was my instructor in college, my mentor, my colleague. Most of all he was my friend. RIP Les Grobstein.

Dionne Miller: Heartbroken. Les was a Chicago treasure. I was a regular middle-of-the-night listener and he was always so kind to me when we’d catch up in a press box. Our city lost an irreplaceable voice. Prayers of comfort to his loved ones & @670TheScore family.

Fred Mitchell: Such sad news regarding the passing of Chicago sports radio legend Les Grobstein. I spent so many years with him in press boxes, locker rooms and press conferences all over the world. In August of 1991, I spent a week covering the Bears leading up to their preseason game against the 49ers in Berlin, Germany. On the day before the game when practices concluded, we decided to drive to Poland since the Berlin Wall had come down two years earlier. And we ate in this little Polish restaurant. En route to Poland, we passed through border patrols between West and East Germany. In true Grobstein fashion, he rolled down the window and shouted derogatory comments toward the armed German border patrol soldiers as I sped away as quickly as I could. RIP

Mark Pinski: I have so many Les stories, but one that stands out the most is when we were playing softball at Grant Park. I was 21. I followed him to a pay phone and watched him put in a few quarters, then without any notes at all, without any prep whatsoever, he flawlessly did a two-minute sportscast for WLS-AM. I was amazed, since everybody else I observed literally wrote down their update word for word. His memory was remarkable, and his work ethic absolutely amazing.

Cheryl Raye-Stout: There are people in your life that makes an impact on you personally and professionally, Les Grobstein was both. Learning this morning that my friend and colleague has passed is heartbreaking. We worked and traveled together to many sports venues. But his friendship was the most important to me and everyone that was fortunate to have with Les. My condolences to his son Scott, his grandchildren and his longtime partner Kathy.

Bob Roberts: Long before there was a StatCast, there was the walking, talking human almanac of sports knowledge, especially if the question was Chicago in nature. It was Les Grobstein. Facts and stats rattled around Les's brain for immediate recall when all others had long ago forgotten them, and he made the jobs of many of us in press boxes that much easier as a result — and sparked many a great debate. RIP Les. The saying, "May his memory be a blessing," could not be more appropriate.

Mitch Rosen: Our staff is devastated. Our audience lost a great friend overnight. Les was a legend that will never be forgotten. He was a best friend to so many that knew him that he never knew. That’s the power of radio.

Phil Rosenthal: Les Grobstein was a character from a movie or novel. A hard-working, one-of-a-kind guy who gladly filled in the back story to any situation because he had been to everything, knew everybody, remembered it all and was eager to share. What a void he leaves. Broken heart. #RIPGrobber

Tom Shaer: In the 1970s and 80s, sports writers didn't want broadcasters around. It was open warfare - and the Baseball Writers Association of America (BBWAA) controlled access to press boxes, etc. Weeks before the 1984 Cubs NLCS, we learned radio/TV personnel would be shut out of postgame interview rooms and adequate work space in the auxiliary press box. Les organized radio reporters, threatened legal action and had me and George Ofman negotiate with the BBWAA. Fair access resulted and Chicago sportscasters never again faced such issues.

Charles Shriver: In the late '60s when I was P.R. director for the Cubs, I received a call from a mother saying her son wanted to be a sports announcer and could I let him into a game so he could practice on his tape recorder. I said yes, and put him in a vacant broadcast booth at Wrigley Field. He came several times a week all summer with his tape recorder and practiced. It was Les Grobstein. He could drive you nuts at times, but we were friends from then on. RIP Les.

Marc Silverman: Some say, “They don’t make em like Les Grobstein anymore!” Truth is, they never made anyone else like Les. He was a one of a kind. Speaking of kindness, as I was trying to find my way as a 23-year-old reporter, nobody was more helpful. RIP to a man who was Chicago sports. Legend.

Ray Stevens: Les would be leaving the all-night shift I’d be coming in to do mornings on US99. He would always stop and continue talking. He never stoped talking sports. He loved radio, loved this town. Loved Mitch Rosen. Sad.

Fred Winston: Les was part of my morning show ensemble on WLS in the 80’s. A kind and gentle soul, indeed.