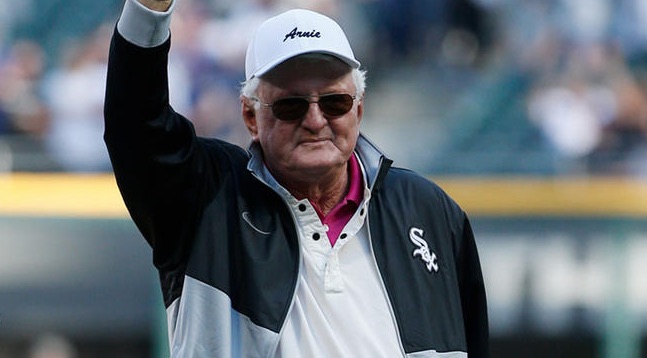 Ken "Hawk" Harrelson’s 34th year in the Chicago White Sox broadcast booth next season will be his last, the organization announced Wednesday.

Harrelson will work a 20-game schedule of primarily Sunday home games during the 2018 season, after which he will step down to serve as a White Sox ambassador throughout the 2019 season. END_OF_DOCUMENT_TOKEN_TO_BE_REPLACED 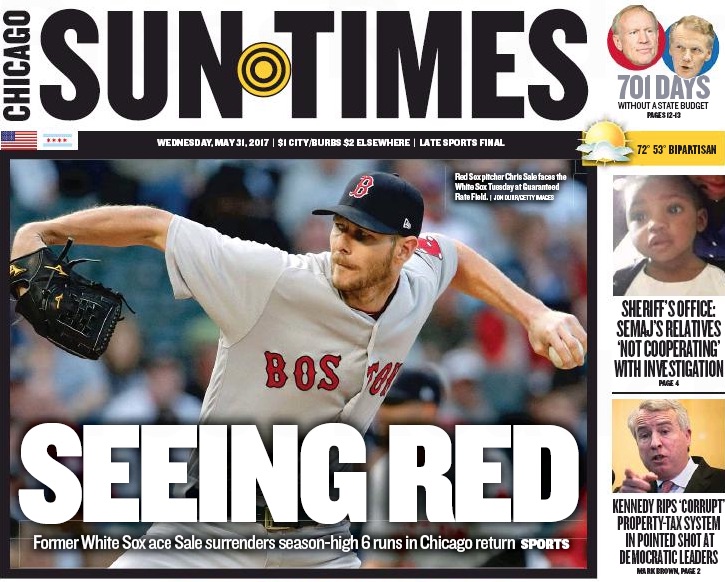 The parent company of the Chicago Sun-Times has agreed to give potential buyers a few more days to make a bid for the newspaper, possibly derailing a deal with Chicago Tribune owner tronc.

At the request of the U.S. Department of Justice Antitrust Division, Wrapports Holdings LLC will extend the deadline to Monday, giving others five more days to prepare an offer, according to Jim Kirk, publisher and editor of the Sun-Times. END_OF_DOCUMENT_TOKEN_TO_BE_REPLACED 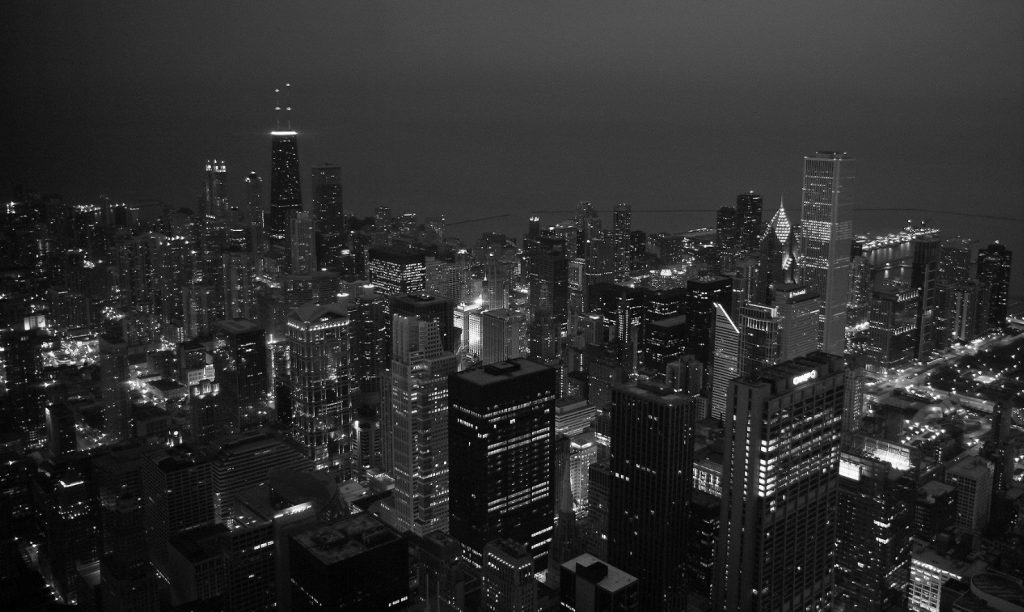 Late-news ratings took another hit in May, with viewership down more than 17 percent in key adult demographics for all of Chicago’s 10 p.m. Monday-through-Friday newscasts. Nielsen numbers for the May sweep showed overall ratings dropped 12.8 percent from last year and 17.6 percent among viewers between 25 and 54. Analysts offered a variety of explanations for the decline, including erosion of audience to digital media, time-shifting among primetime viewers, and lower levels of homes using television versus last May. One source cited “news fatigue” by consumers since the presidential election. In total households and adult demos, ABC-owned WLS-Channel 7 finished first in all afternoon and evening news races, while Tribune Media WGN-Channel 9 won in mornings. END_OF_DOCUMENT_TOKEN_TO_BE_REPLACED 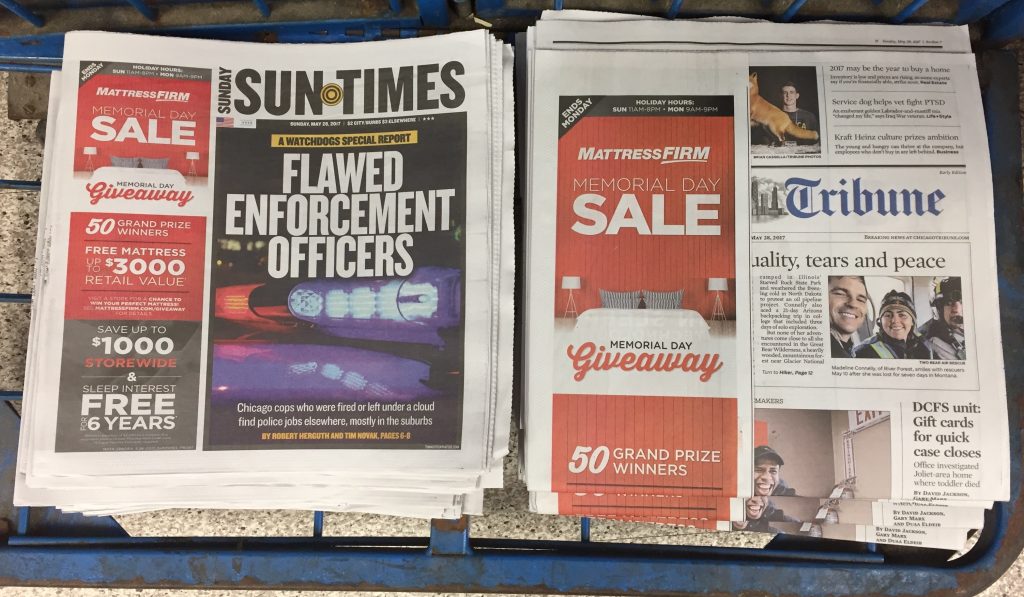 Editorial employees of the Chicago Sun-Times and the Chicago Reader aren’t going along with the proposed sale of their company to tronc without a fight.

Staffers represented by the Chicago News Guild are seeking to block the takeover by the parent company of the rival Chicago Tribune — or at least extend the deadline for other potential bidders to come forward. END_OF_DOCUMENT_TOKEN_TO_BE_REPLACED 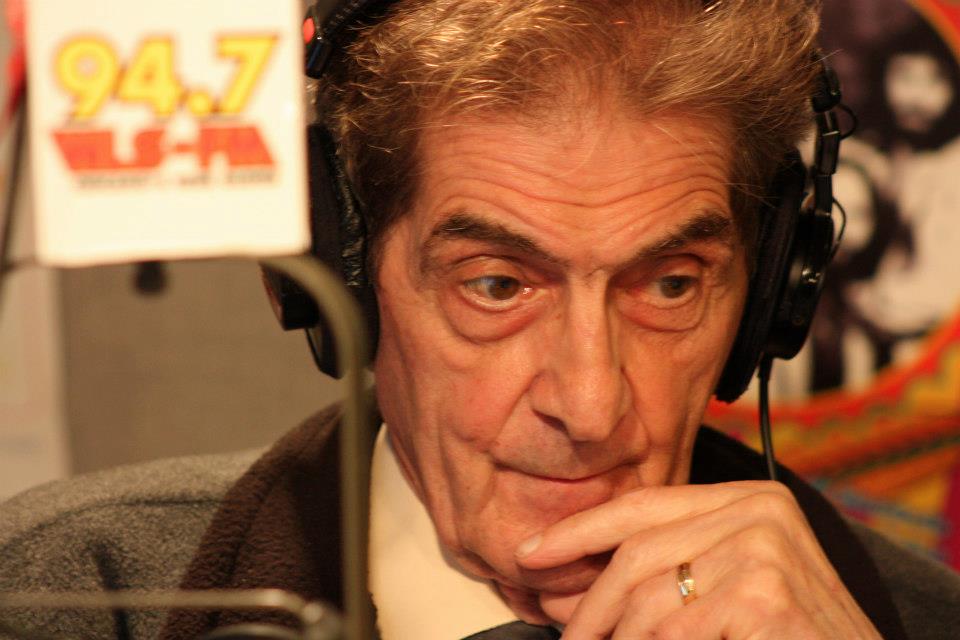 Radio legend Dick Biondi, who’s been missing in action since early April, said he’s looking forward to getting back on the air as soon as his doctors get him “back into fighting shape.”

Biondi, 84, was said to be recovering from a leg ailment for which he was hospitalized earlier this month. No other details have been disclosed.

“I want nothing more than to get back to entertaining the greatest radio audience in the greatest city in the world!” Biondi said in a statement released Saturday by Scott Miller, his longtime friend and former producer. END_OF_DOCUMENT_TOKEN_TO_BE_REPLACED

With the subtlety of a thermonuclear blast, Mike James signed off Friday after 19 years as the self-styled “surly editor” of NewsBlues.com, the daily subscription newsletter on the local television news business.

James is retiring, but NewsBlues will continue under the new ownership of Rick Iler, a former news director and media investor. Iler said he plans to introduce a “new aggressive look, style and feel” to the TV news insider website “while staying true to its iconic, subversive brand.” The new era starts Tuesday. END_OF_DOCUMENT_TOKEN_TO_BE_REPLACED 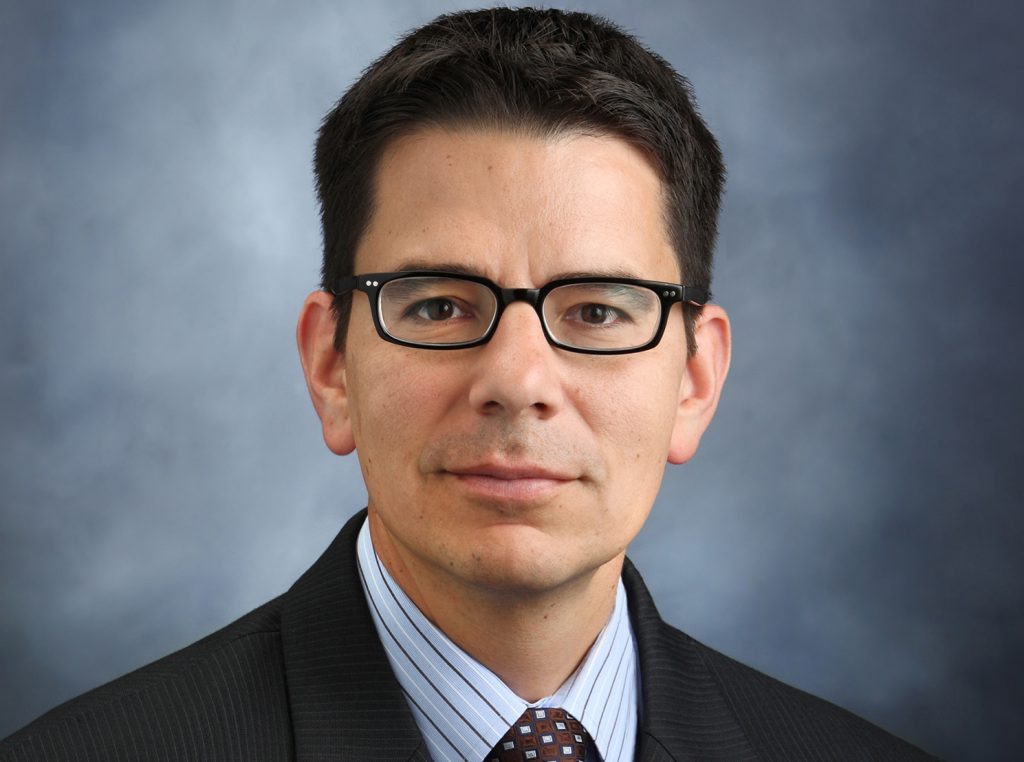 No reason was cited for the departure, and Bedella could not be reached immediately for comment. END_OF_DOCUMENT_TOKEN_TO_BE_REPLACED 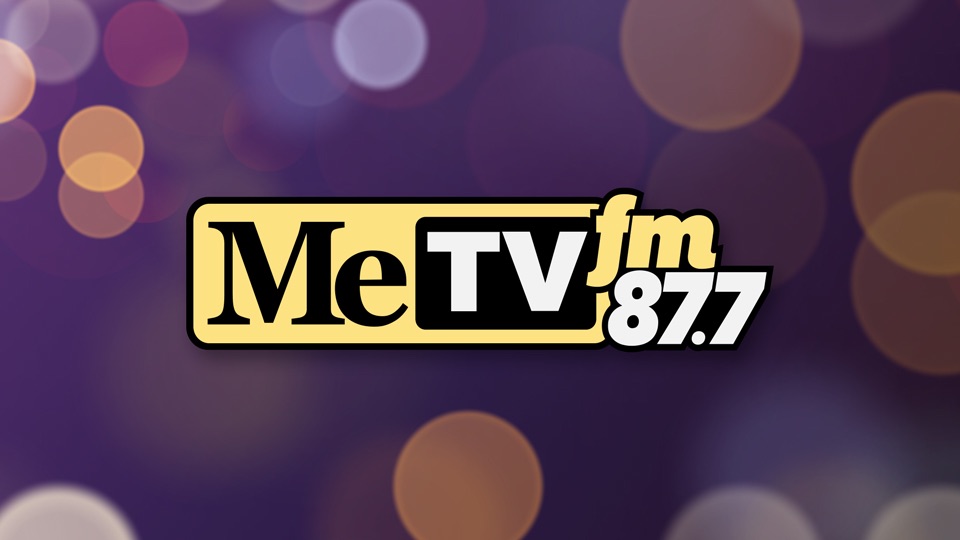 Launched in 2015 on a low-power leased signal at WRME LP 87.7 and immediately embraced by a large and loyal audience of baby boomers, the station has signed with Cleveland-based Envision Networks to syndicate the soft rock/oldies format under the Me-TV FM brand in cities across the country. END_OF_DOCUMENT_TOKEN_TO_BE_REPLACED 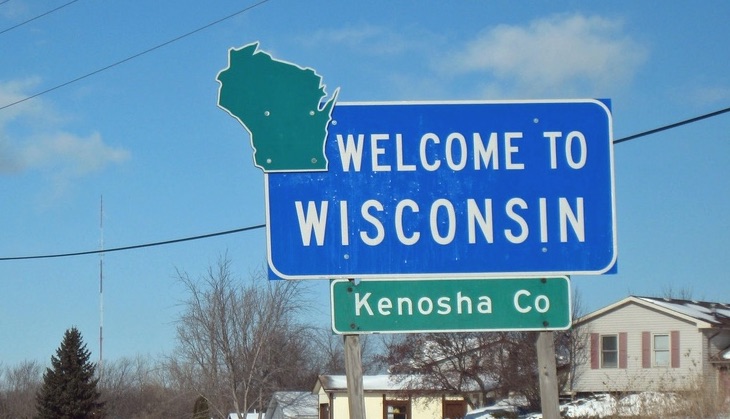 It’s official: Kenosha stays. Nielsen Audio announced Wednesday that it won’t be eliminating Kenosha County, Wisconsin, from the Chicago metro market. A vote among Chicago area broadcasters failed to achieve the required three-fourths majority to approve the change. It’s a huge victory for Hubbard Radio, which would have seen its ratings decimated for classic rock WDRV FM 97.1 (since The Drive simulcasts on Zion-based WWDV FM 96.9). “It is gratifying to see the majority of Chicago radio ownership groups pull together to ensure we serve, and can measure, as many listeners as possible,” Jeff England, vice president and market manager of Hubbard Radio Chicago, said in a statement. END_OF_DOCUMENT_TOKEN_TO_BE_REPLACED 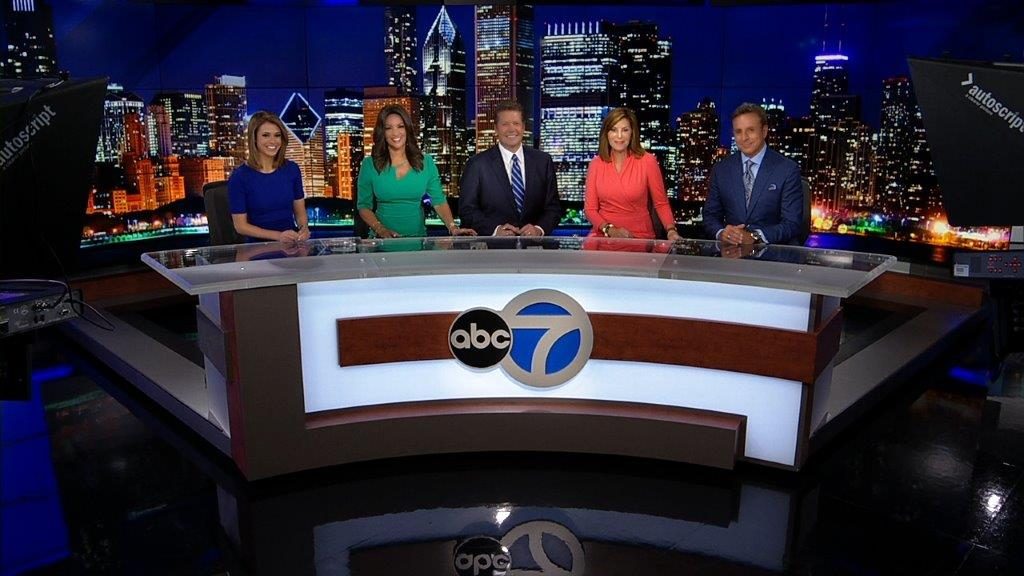 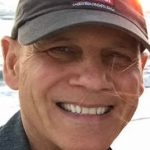 Thanks in part to a boost from retired Cub David Ross on “Dancing with the Stars” as a lead-in, it looks like ABC-owned WLS-Channel 7 will score another win for its 10 p.m. newscast in the May rating sweep, which ends Wednesday. Barring a miracle, ABC 7 also is poised to beat NBC-owned WMAQ-Channel 5 among viewers between 25 and 54 — the group most sought by advertisers. NBC 5, which led in the key Nielsen demo in recent years, has been challenged by the absence of a key player. Principal news anchor Rob Stafford has been out since March on medical leave for a bone marrow transplant and treatment of amyloidosis, a rare blood disease. END_OF_DOCUMENT_TOKEN_TO_BE_REPLACED