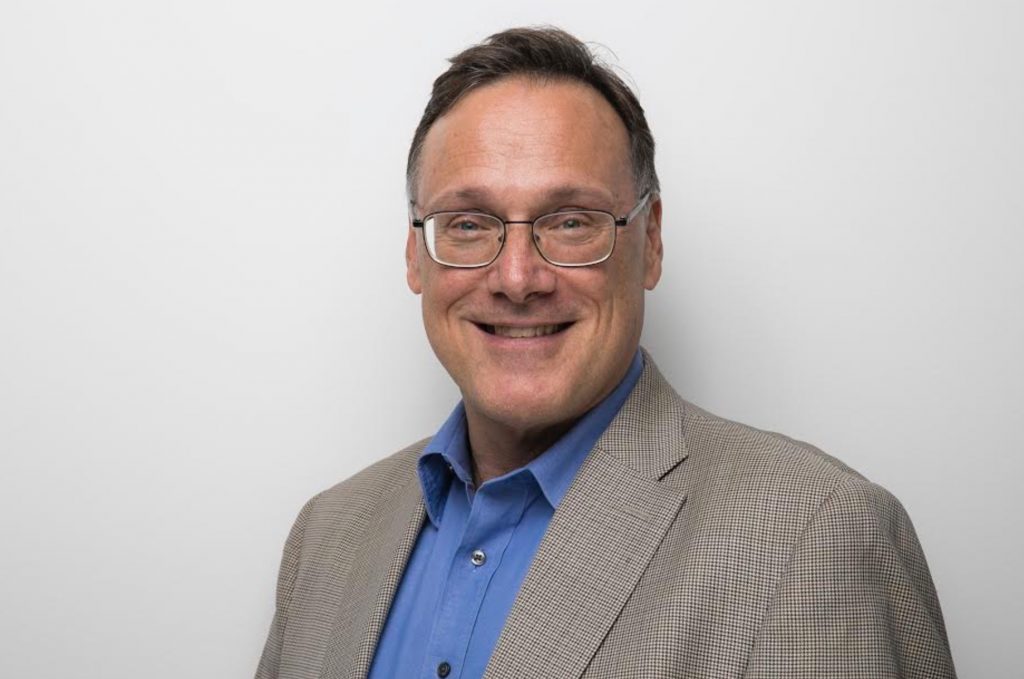 Edwin Eisendrath, the former Chicago alderman who led the investment group that bought the Chicago Sun-Times last year, has resigned after 16 months as chief executive officer of the struggling newspaper’s parent company.

Along with his departure, effective immediately, the company announced the appointment Wednesday of Nykia Wright as interim CEO. Wright joined Sun-Times Media Group as chief operating officer last October after working as a financial analyst and consultant for companies in Chicago, Atlanta and London. END_OF_DOCUMENT_TOKEN_TO_BE_REPLACED 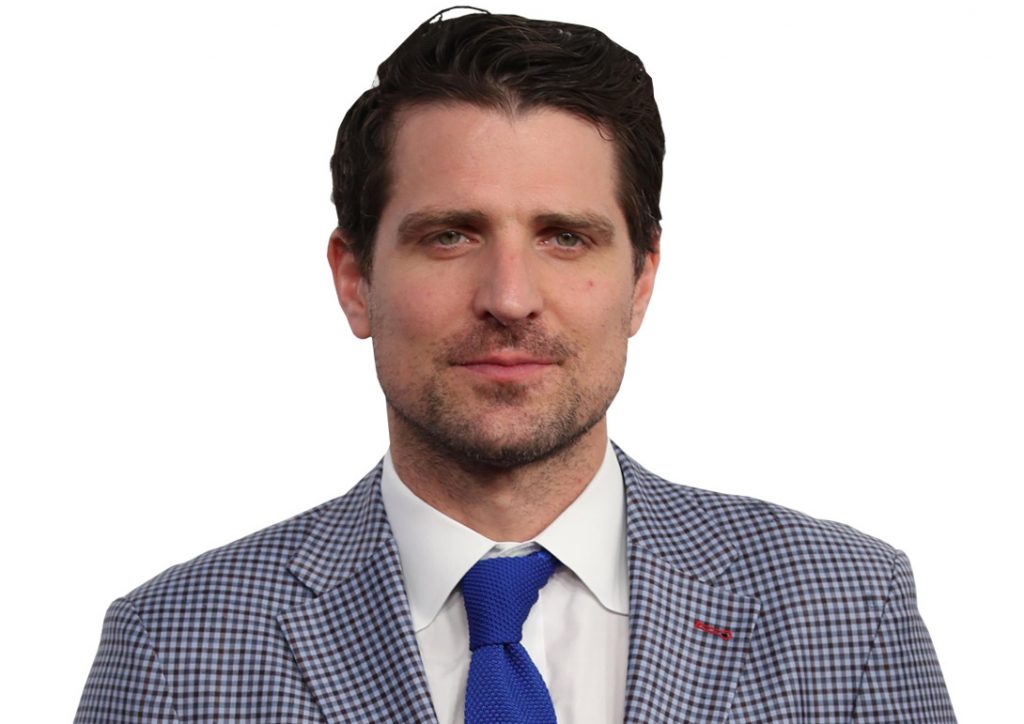 Patrick Sharp, who helped lead the Chicago Blackhawks to three Stanley Cup championships, has joined NBC Sports Chicago as an in-studio analyst. Starting Thursday, he’ll appear on "Blackhawks Pregame Live/Postgame Live" with host Pat Boyle and analysts Adam Burish and Jamal Mayers. Sharp also will contribute nationally to "NHL Live," NBC Sports’ live pre- and post-game studio program. “I am excited to join the NBC Sports Chicago team,” said Sharp, who retired from the Blackhawks in April. “After a long career on the ice, it will be fun and challenging to be a part of the game from a new perspective, and I look forward to working with former teammates and people that I’ve watched on NBC Sports Chicago for many years.” END_OF_DOCUMENT_TOKEN_TO_BE_REPLACED 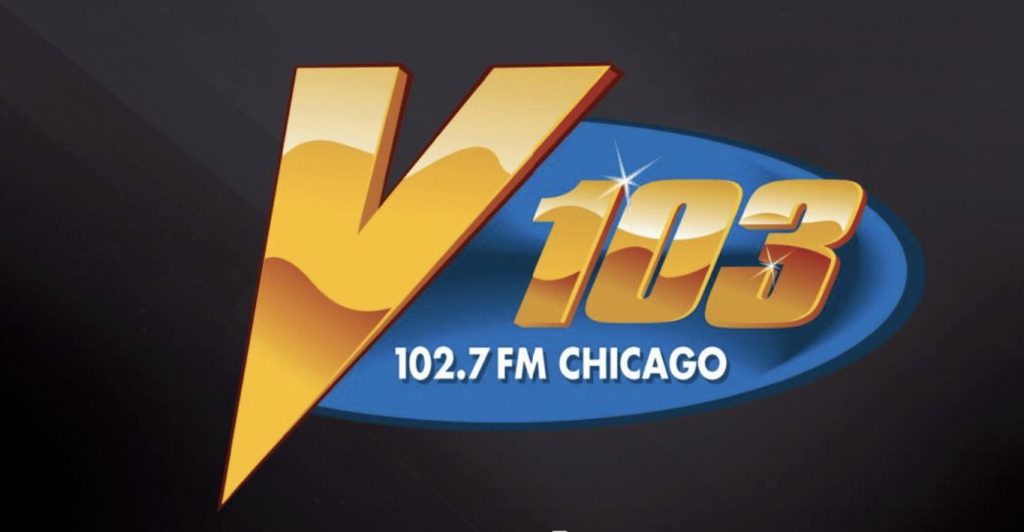 Nielsen Audio figures released Monday showed the iHeartMedia urban adult-contemporary powerhouse No. 1 among all listeners. V103 leads the market with 56 first-place finishes in the monthly survey since Nielsen introduced Portable People Meter-based surveys in 2008, according to the station. END_OF_DOCUMENT_TOKEN_TO_BE_REPLACED 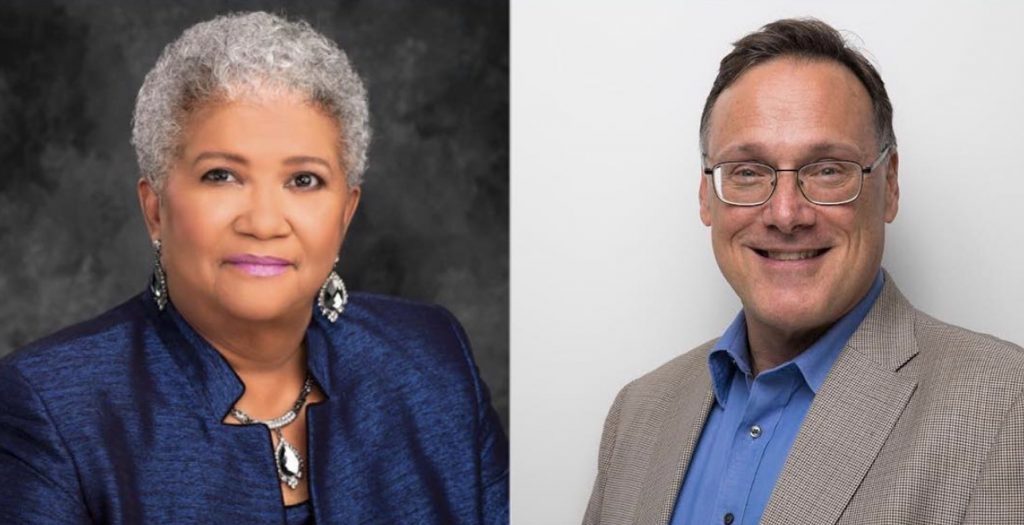 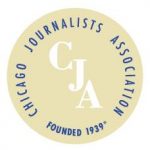 Three Chicago area columnists have been named finalists for the Chicago Journalists Association’s 2018 Dorothy Storck Award. They are Mark Brown of the Sun-Times; Deborah Douglas, whose work has appeared in the Chicago Reporter and Vice News; and Mick Dumke of ProPublica Illinois. Winner of the $1,000 prize will be announced at the group’s annual luncheon Saturday at Rock Bottom Restaurant & Brewery, 1 West Grand Avenue. (Here is the link for tickets.) The award is named for the former reporter for Chicago’s American and Chicago Today who died in 2015. Keynote speakers at the event will be Dorothy Leavell, publisher of the Chicago Crusader and new board chairman of the Chicago Reader, and Edwin Eisendrath, CEO of the Sun-Times. END_OF_DOCUMENT_TOKEN_TO_BE_REPLACED 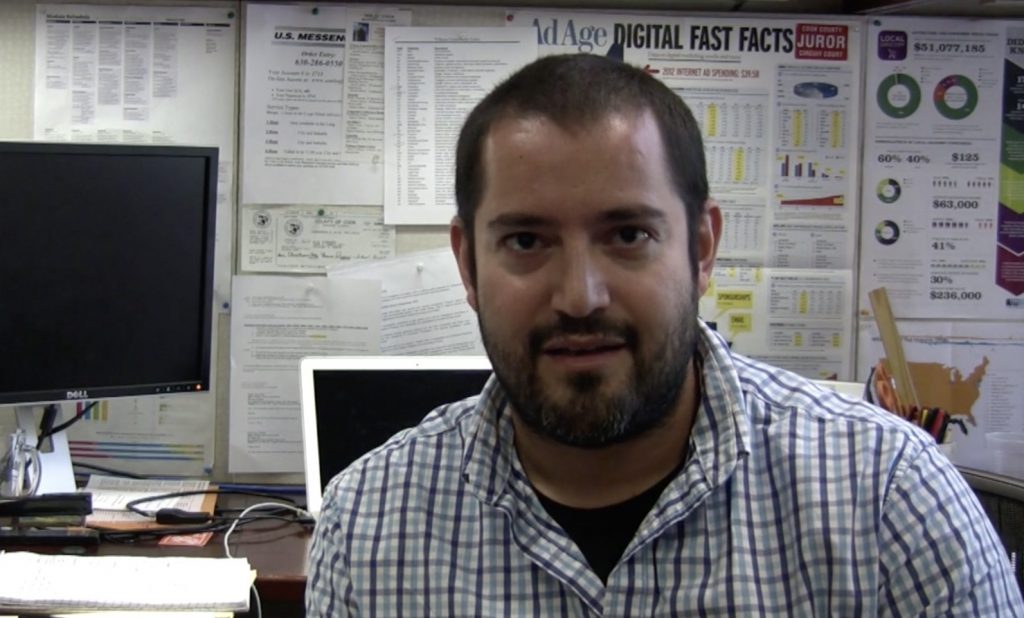 Fernando Diaz, onetime reporter for the Daily Herald and former managing editor of the Spanish-language daily Hoy Chicago, has been named editor-in-chief and publisher of The Chicago Reporter. His appointment, effective November 19, was announced Thursday by the nonprofit Community Renewal Society.

Diaz, who most recently was managing editor for digital coverage at the San Francisco Chronicle, succeeds Susan Smith Richardson, who stepped down earlier this year after five years at the award-winning investigative news organization that focuses on race, poverty and income inequality. END_OF_DOCUMENT_TOKEN_TO_BE_REPLACED 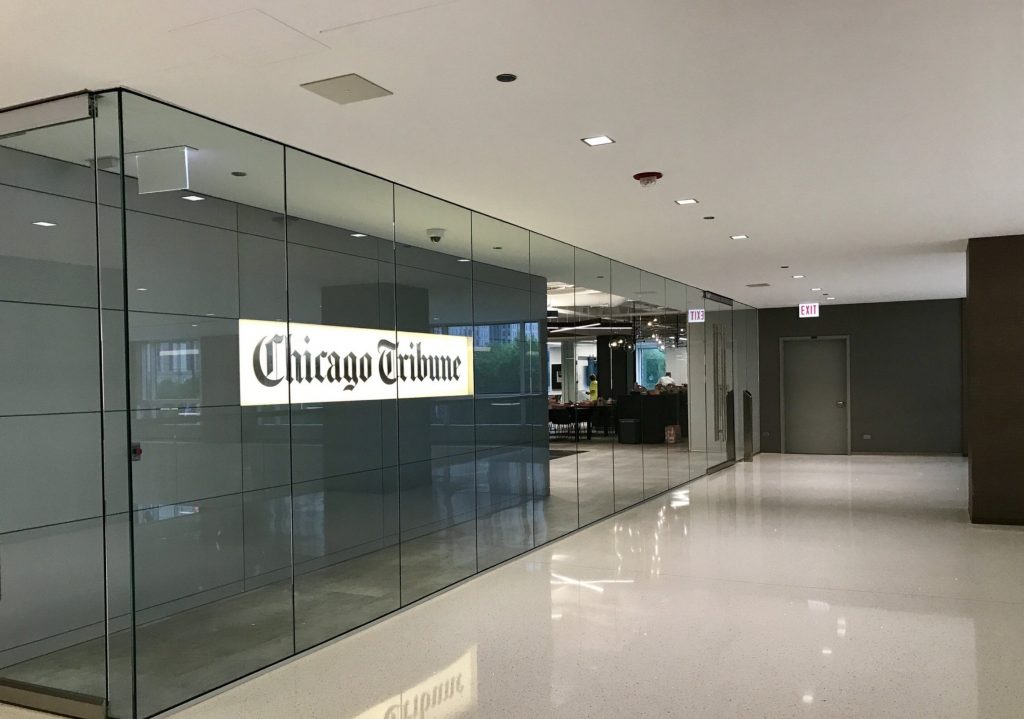 Citing pipe bombs sent to Hillary Clinton, Barack Obama, CNN and others Wednesday, the Chicago Tribune turned away delivery of all packages to its Prudential Plaza headquarters. A memo to staffers from Tim Knight, president of Tribune Publishing, and Bruce Dold, publisher and editor of the Tribune, said: “Out of caution, we suspended package delivery this morning to our Chicago Tribune offices at Prudential Plaza and enhanced our inspection of packages delivered to Freedom Center. No suspicious packages have been received at our offices.” Staffers were advised to report suspicious activity to security. END_OF_DOCUMENT_TOKEN_TO_BE_REPLACED 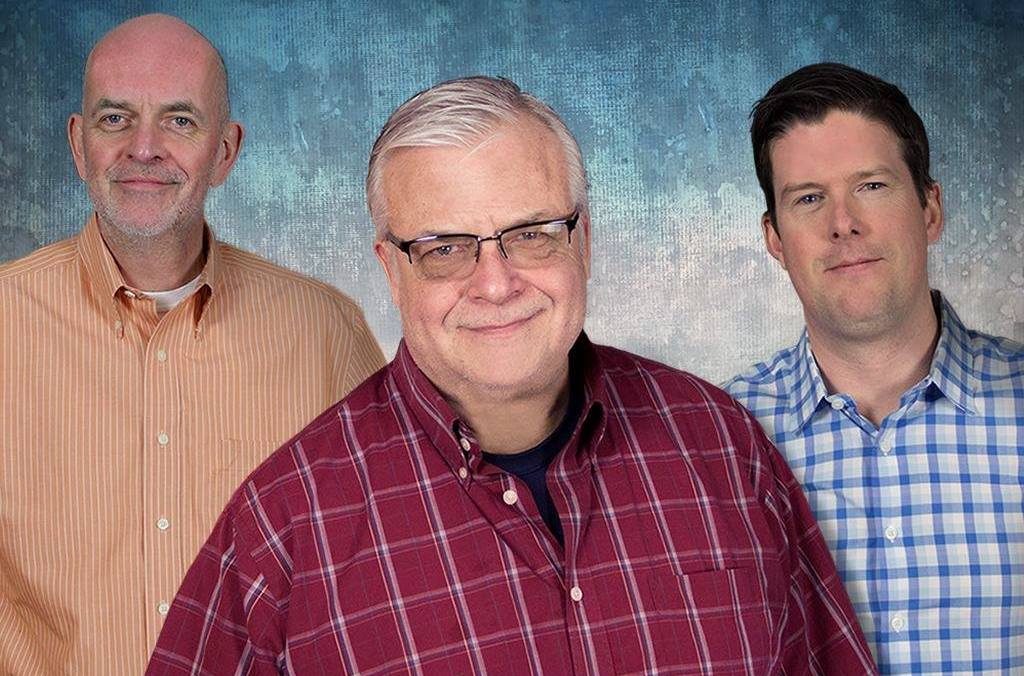 The end is near for Steve Dahl on WLS 890-AM. After four years as afternoon host on the Cumulus Media news/talk station, the Chicago radio legend and Radio Hall of Famer has confirmed his final show will air December 21. His announcement followed a report here Tuesday that WLS is planning a major overhaul of its weekday lineup early next year. In the latest Nielsen Audio survey, Dahl's show ranked 25th with a 1.4 percent share. "I would have liked to finish with some better radio ratings, but that didn’t happen," he wrote in an email. "WLS-AM was always going to be an uphill battle, and circumstances just didn’t lend themselves to us being able to breakout like we hoped we would." Dahl, 63, will continue to produce his daily podcast with co-hosts Dag Juhlin and Brendan Greeley at dahl.com. END_OF_DOCUMENT_TOKEN_TO_BE_REPLACED 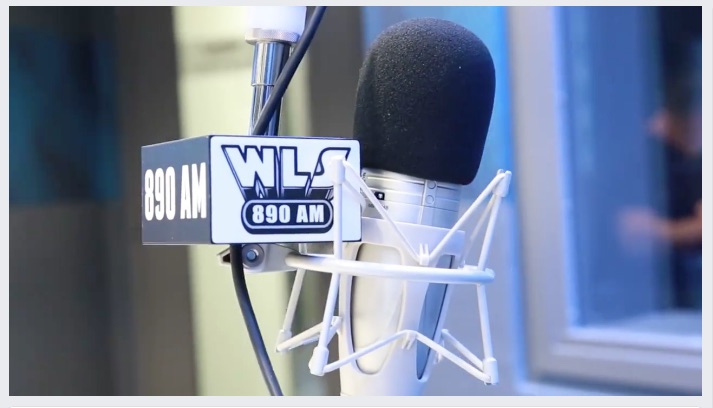 Now that classic hits WLS 94.7-FM is riding high in the ratings, and alternative rock WKQX 101.1-FM is looking up, Cumulus Media is finally zeroing in on its chronically underperforming AM station — news/talk WLS 890-AM.

Plans are in the works for a major overhaul of the station’s Monday-through-Friday lineup early next year under operations manager and program director Peter Bolger. Once among the top-rated stations in Chicago, the 50,000-watt AM giant never recovered after the loss of longtime morning star Don Wade, who died in 2013. END_OF_DOCUMENT_TOKEN_TO_BE_REPLACED 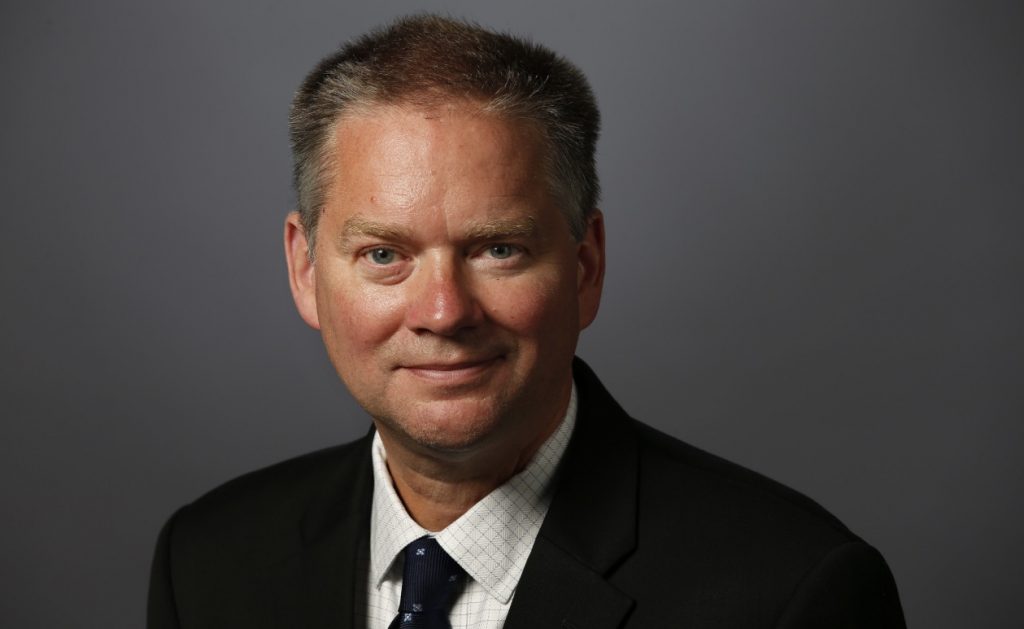 Jim Kirk, the veteran journalist and former publisher and editor-in-chief of the Chicago Sun-Times, has been named publisher and executive editor of Crain’s Chicago Business. 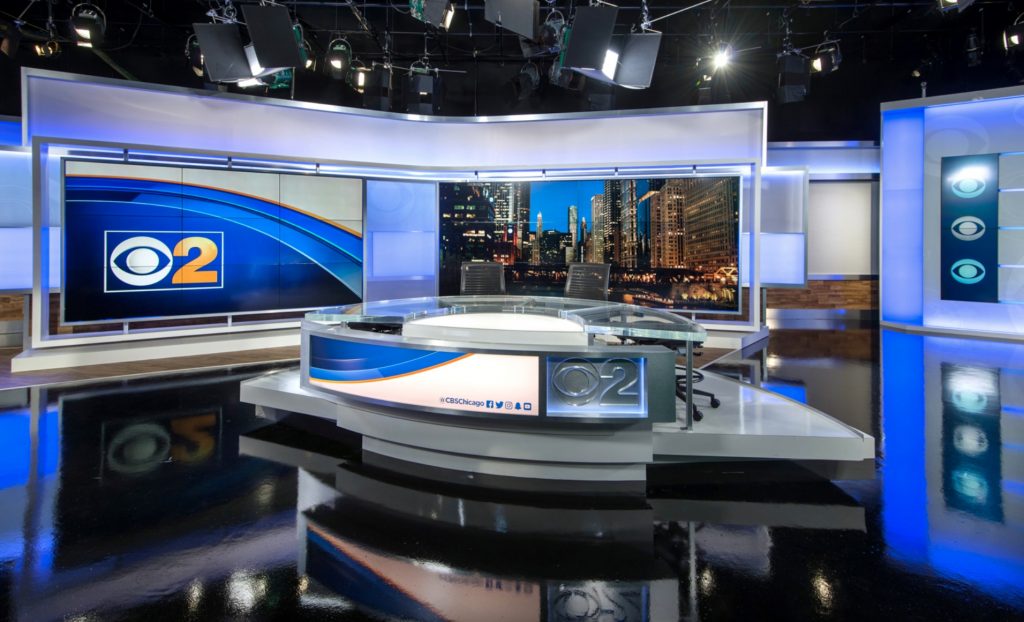 WBBM-Channel 2 could be facing a substantial fine or other penalty from the Federal Communications Commission for illegally broadcasting emergency warning tones in a news promo.

The CBS-owned station aired the Emergency Alert System Attention Signal in the opening of its 5 p.m. newscast Thursday. It was used to tease a story about an Amber Alert child abduction that had been issued — and rescinded — earlier in the day. END_OF_DOCUMENT_TOKEN_TO_BE_REPLACED