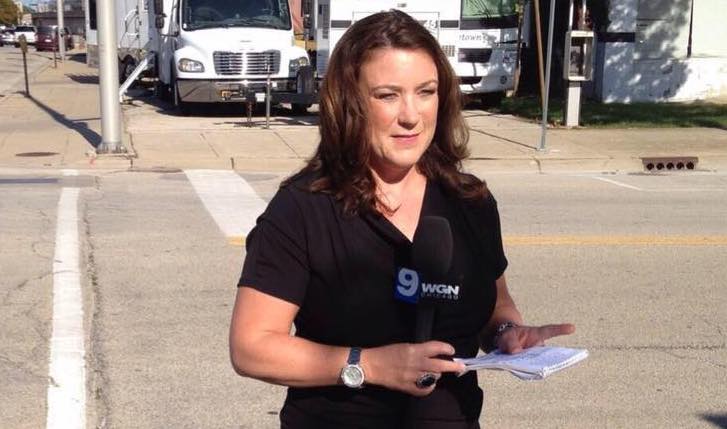 After more than 20 years as a reporter for WGN-Channel 9, Marcella Raymond says she’s suffering from post-traumatic stress disorder because of her job.

“Sharing my story is scary but I’m hoping we can address the stigma of PTSD, show the warning signs, and get real,” Raymond wrote in an introduction to her new Facebook blog, which she titled: “I’m a Chicago Journalist with PTSD.”

It's the price she says she's paying for decades of knocking on people's doors and shoving microphones in their faces at the worst times of their lives.

"I hate these stories," she recalls on her way to covering the latest murder in West Englewood. "I’m driving to the scene in the live truck with my photographer as I write this, trying not to cry, thinking if I should pop a valium to get me through the day."

Bosses of the Tribune Broadcasting station expressed support for Raymond. “Marcella is a valued member of the WGN news team and brings a great deal of compassion and context to the stories she covers," said Gary Weitman, senior vice president of corporate relations for Tribune Media. "We will continue to work with Marcella to address her needs and ensure that she has the opportunity to do her best work.”

Raymond, 53, who grew up in Downers Grove and graduated from Montini High School in Lombard and Columbia College in Chicago, joined WGN as a general assignment reporter and fill-in news anchor in 1998. She previously worked for stations in Dayton, Ohio, and Rockford.

The last time Raymond made headlines was in 2016 when she posted a letter on Facebook that she'd received from a viewer criticizing her appearance. "Please allow me to point out (with great respect) that you have gained too much weight," the unsigned letter said.

Raymond replied: “I’m 50 years old, and I’m not going to look like I did when I was 23. And I can’t compete with those girls. And it’s not feasible. I can’t do it. I would spend my entire life doing that and I have other, better, more important things to do.”

She received an outpouring of support from viewers who condemned what they called body shaming.

In 2006 Raymond was convicted of misdemeanor battery for grabbing a woman's left middle finger in an altercation over a parking space. Raymond was upset at the woman for parking diagonally at a Glen Ellyn gas station and taking up two spots.

My two story choices for today: to try to get an interview, or “sound,” with a Chicago firefighter who violently lost his son. He was stabbed to death in a car, the car set on fire, his body found outside the car. He was trying to get away. No one knows what happened yet. I did not want to do it. I mean that’s cruel, and firefighters will hate us. I have many friends who are first responders. I can’t see knocking on this family’s door and asking for someone to talk to us. Father's Day is not the day to do this.

So, now I’m driving to another murder in West Englewood. A fifteen-year-old Simeon HS freshman had just finished playing basketball with friends. It wasn’t even dark yet. They were on their way home when a car came out of an alley and started shooting. Six bullets casings were found. One, two, three… all with yellow markers with numbers over them. Why? Police aren’t saying yet. Now I have to go talk to his grieving family about him. “Tell me what kind of kid he was.” “What was he doing last night when he was killed?” “Do you know what happened?” “Are there pictures you’d like to share with us?”

I hate these stories. I will go up to the door in West Englewood. There will probably be a ton of family members and friends sitting on the porch. I’ll say, “I’m Marcella Raymond from WGN.” They might know me they might not. “I’m so sorry to be here and bother you at this time. I’m a mother too. I can’t imagine what you must be going through. But I just wanted to see if you wanted to say a few things about Austin. I’d like to tell your story.”

I’m driving to the scene in the live truck with my photographer as I write this, trying not to cry, thinking if I should pop a valium to get me through the day. My therapist, a Chicago police officer who is thankfully off the street, counsels first responders. Firefighters, cops, FBI, ATF and DEA agents, 9-1-1 dispatchers. I’m his first journalist. One of his partners killed herself. Another colleague died trying to save people from a man with a gun. He gets it. A few days ago, he gave me a breathing exercise to do; one hand on my stomach, the other on my heart. Breathe in for four seconds, hold it for four, breathe out for four. I decide to just breathe for now.

My photographer asks me if I’m okay. I start to cry, tell him I’ve been diagnosed with PTSD and that this day is gonna suck. He understands.

My “problem” is I get too involved in my stories. I want to do justice to every innocent person who's been shot and killed, to every person killed in a fire, to every person killed in a car crash or walking across the street or standing at a bus stop or on the EL. That’s why I do it; to let the family know I care, to tell their story more than about just the horrible death of their child. I can’t be a bystander looking in. I have to jump in with my whole body. But at what cost to me?

We get to the street where Austin was killed, 68th and Bell. His mother is too distraught to talk. His stepfather, Charles Smith, says he will. When the shooting started, everyone ran in different directions to get away from the bullets. Austin instinctively kept running down the alley, just houses from his home, when he was shot in the back. Mr. Smith says even if there are hundreds of cops in this neighborhood, it would still happen. He says danger is lurking everywhere. I ask if I can give him a hug. He accepts.

Stay safe out there. Talk soon.