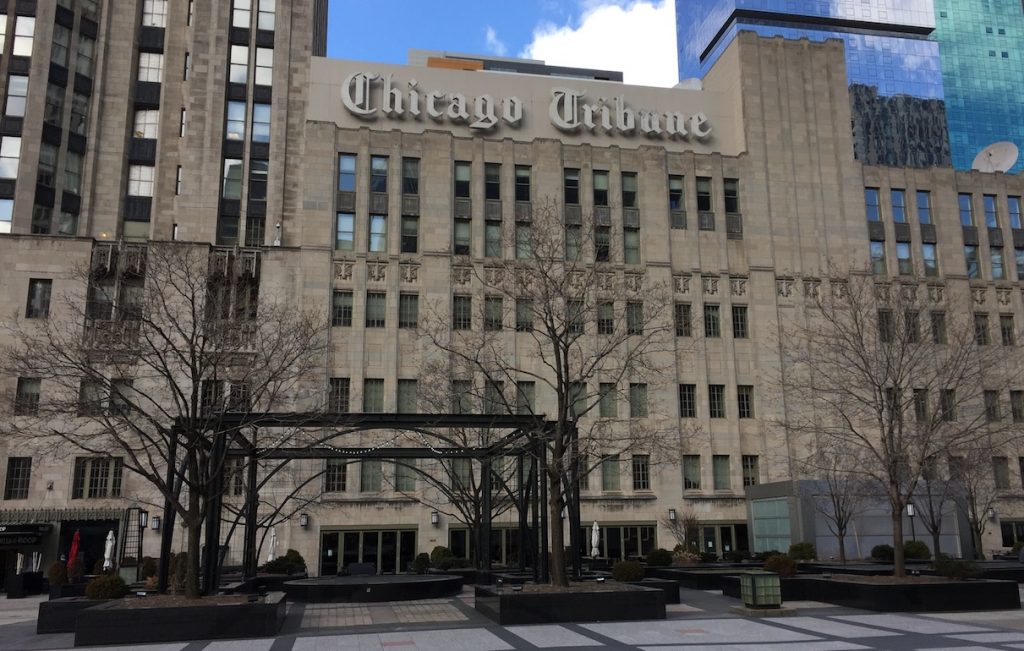 Chicago Tribune staffers bid farewell to more of their colleagues as another wave of layoffs hit the newsroom today.

“Everyone who walks out of the newsroom with their things gets a round of applause,” tweeted Tribune reporter Peter Nickeas. “Nobody has communicated to the newsroom about what's going on.”

Marisa Kollias, vice president of communications and public relations for parent company tronc, would not confirm the number of layoffs.

“The Chicago Tribune is reshaping its newsroom and making important steps in our ongoing effort to become more a digital enterprise,” Kollias said in a statement. “Excellence in journalism remains our top priority. The newsroom is redefining jobs and structure so that people are in the best position to create and deliver news content for the rapidly changing demands of our audience.”

It marked the second round of layoffs in five months under publisher and editor-in-chief Bruce Dold. In October Dold cited “significant financial pressure” facing the news industry in cutting a reported 14 positions, mainly on the editorial side of the Tribune and its Pioneer Press suburban group.

The latest cuts have been expected since Dold announced plans for a sweeping reorganization aimed at transforming the newsroom into what he called “more nimble, more entrepreneurial, more responsive to our readers’ current interests and permanent passions.”

The streamlined organizational structure outlined by Dold included “far fewer titles and classifications,” and set forth new job descriptions requiring employees to reapply for their positions.

Thursday’s layoffs and the uncertainty surrounding them may help fortify an effort to unionize Tribune editorial employees. Last week a group of staffers met with representatives of the Chicago News Guild, longtime bargaining agent for the Sun-Times and numerous suburban papers. The meeting was described as preliminary to a full-scale organizing effort.

Earlier this year employees at the Los Angeles Times voted overwhelmingly to be represented by the News Guild-Communications Workers of America. Tronc subsequently announced the sale of the L.A. Times for $500 million.

“Thinking of all the great journalists at the Chicago Tribune,” tweeted media writer David Uberti. “Also thinking about how tronc just sold the LA Times for a whopping $500 million and recently inked a deal to pay its chairman's consulting firm $15 million over three years.”

Further cuts are expected as the newspaper prepares to leave Tribune Tower for smaller space at Prudential Plaza.

Update: Here is the text of a memo to staff from Dold:

Over the last two weeks our newsroom leaders have held conversations with you about the reorganization of the Chicago Tribune. These exchanges have been tremendously helpful as we prepare for our future. You've shared ideas on what our coverage priorities should be and how we can draw more readers. You've offered excellent suggestions on who would be strong candidates to hire and promote as we become a truly digital-focused and more diverse organization.

We know this has been a challenging time. In the coming days we will work with you to determine your assignments and responsibilities so you know exactly what your role will be.

In our commitment to provide competitive compensation for newsroom employees, we are completing a salary review. Compensation changes for staffers not governed by collective bargaining agreements will go into effect on April 1.

We will hold a Town Hall meeting at 1 p.m. on Monday, March 26, in Campbell Hall to introduce the coming redesign of the Chicago Tribune website. At that meeting we will detail and demonstrate our new content management system, Arc, the replacement for P2P we have licensed from The Washington Post. We will lay out the development and training timelines for implementation of Arc. There will be time at the end of the Town Hall to take your questions.

Last week, I visited the build-out of our new home at Prudential Plaza. It will reflect the Chicago Tribune's 170-year success story and enhance our transition to a digital workplace. This week, the company shared more details on parking and mass transit options and building amenities. A sample workstation has been set up on the third floor of the Tower to give you a better sense of the new work environment. We are on track to move in late May.

Today, we took the most difficult step in this transformation. We notified a number of employees that their positions are being eliminated.

I know the impact this has on everyone in our organization. That impact is by far most profound on those who are directly affected. I want to thank them for the work they've done for the Tribune.

A lot has happened with our organization and structure in just the last two weeks.

Here's what else happened in that time: We published an impactful investigative report on the secret offshore holdings of a major candidate for governor; we broke news about a significant retail development along the Chicago River; we wrote with heart about Loyola University's NCAA-qualifying basketball team; we gave our readers details they couldn't get elsewhere about the expansion of O'Hare International Airport.

We won Top 10 Awards from the Associated Press Sports Editors for Daily Section, Sunday Section and Special Section. We were presented with the Philip Meyer Award for the best journalism done using social research methods.

Those are just some highlights. We provided much, much more for our readers.