Despite an embarrassing snafu involving a Howard Stern prankster, NBC-owned WMAQ-Channel 5 is defending its decision to put live calls on the air during Monday night’s coverage of tornadoes in the area.

Chief meteorologist Brant Miller handled the awkward moment when “Ryan,” identified as an eyewitness to the storm calling from the back of his tractor trailer in Morris, Illinois, said the wind was blowing “like it’s a blast from Howard Stern’s asshole.”

But when Miller threw it back to news anchors Rob Stafford and Allison Rosati, the two seemed utterly oblivious to the hoax. “We’re concerned — I’m concerned about Ryan back in his truck,” Stafford said. “What should he do right now?”

Video of the incident turned up Tuesday on the website Gawker.com (“News Anchors Worry About Howard Stern Prankster's Safety During Tornado”) and quickly migrated to other sites ("WMAQ Anchors Concerned About Fake Caller’s Fake Danger") through social media. 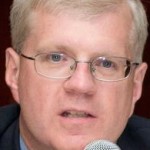 Frank Whittaker, station manager and vice president of news at NBC 5, defended the decision to air calls as part of the station’s continuous weather coverage.

“When tornadoes are on the ground in our viewing area, we go on the air to keep people safe,” Whittaker said Wednesday. “We interview people who are on or near the scene of the dangerous weather, hoping to learn what’s happening right now so we can alert our viewers. Our callers are screened before we put them on the air. We believed this caller to be legit, unfortunately he was not.”

Unfortunate prank aside, NBC 5 turned out to be a big winner Monday, leading in the length of its continuous coverage and the size of its audience in key demographics. First with nonstop coverage, NBC 5 ran continuously from 8:15 p.m. to 1:35 a.m., garnering a 3.3 rating among adults between 25 and 54. ABC-owned WLS-Channel 7 was second with continuous coverage from 8:46 p.m. to 1:32 a.m., garnering a 2.2 rating in the demo.