Fourteen years after she lost her morning news anchor job to Tamron Hall at Fox-owned WFLD-Channel 32, Marianne Murciano is speaking out about it.

“Tamron Hall moved in and took my job while I was on maternity leave,” Murciano said Monday on the WGN AM 720 midday show she co-hosts with her husband, Bob Sirott. Murciano’s comments were prompted by a New York Post report about a behind-scenes power struggle on NBC’s “Today” show between Hall and Natalie Morales.

“I’m reading about all this and I’m thinking, wow, yeah, I can see how Natalie Morales must be feeling,” Murciano told listeners of the Tribune Media news/talk station.

Murciano and Sirott met and married during their seven-year run as co-anchors of “Fox Thing in the Morning.” After the birth of their daughter, Daniela Samantha, in May 2000, Murciano went on maternity leave, and Hall, then a 27-year-old relative newcomer, filled in for her alongside Sirott. When Murciano returned to Fox 32 six weeks later, she was reassigned to the noon newscast, where she worked out the remainder of her contract. 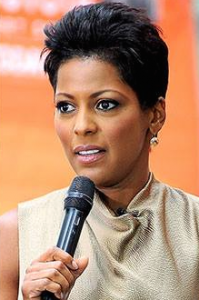 “It was kind of a shock that I went off to have a baby and that while I was on maternity leave, Tamron Hall was filling in for me, and then she became very close with management, which sounds like what’s happening now, and then suddenly she had my job. . . . Like I was never able even to come back and say ‘I’m leaving’ or anything. It was just done.”

The New York Post reported Sunday that Morales had been passed over for several key roles and was “planning her next TV move because of the tense atmosphere behind the scenes” at “Today.” The Post’s Page Six column claimed Morales and Hall were locked in a “power struggle” with NBC News president Deborah Turness. “Today” executive producer Don Nash branded the story “total nonsense.”

Whatever the similarities, Murciano doesn’t seem to have any regrets: “It all worked out for the best because I’m glad I don’t have to wake up early in the morning anymore,” she said.