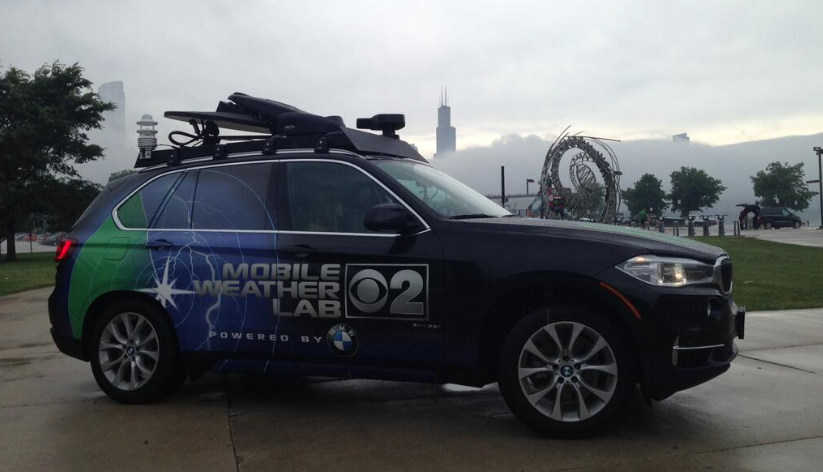 “It’s so cool, you guys, I cannot even tell you,” CBS 2 meteorologist Megan Glaros told viewers as she showed off the vehicle’s bells and whistles for the first time at North Avenue Beach. “It’s just such a neat tool.”

According to a report on CBS 2’s website, here are the specs:

“A heavy-duty HD camera gives viewers a new perspective of the ever-changing weather, capable of rotating 360 degrees while the vehicle is in motion – all controlled through a wireless joystick inside the Mobile Weather Lab.

“It’s also equipped with a live satellite dish to transmit from any location, and two GoPro cameras – one on the dashboard, and one on the side of the vehicle.

“A control panel behind the rear seats allows the user to monitor the cameras, and a touchscreen display creates a multiple camera switcher to deliver pictures back to the CBS 2 studios as they happen.”

Among CBS-owned stations, Chicago comes fairly late to the game with its storm chaser.

In 2010, KYW-TV in Philadelphia unveiled a modified Audi Quattro as its mobile weather station. WCBS-TV in New York followed two years later with a retrofitted Chevrolet Suburban. Among others, KPIX-TV in San Francisco uses a Toyota SUV and KCNC-TV in Denver also uses a Chevy Suburban.

“It’s good television and it separates us from the competition,” Peter Dunn, president of CBS Television Stations, told the New York Daily News in 2012. “From the community perspective, it’s awesome.”