Starting Monday, “Bernstein and Holmes” will air from 10 a.m. to 2 p.m. weekdays. As part of the new schedule, the morning show with Mike Mulligan and David Haugh will move into the 9 a.m. hour, airing from 5:30 to 10 a.m.

“Our all-star Chicago lineup improves with Mully and Haugh extending later into the morning and two teammates who have worked together for 20-plus years finally sharing a microphone on a regular basis,” Mitch Rosen, operations director and brand manager of The Score, said in a statement. “We couldn’t be more excited for this updated lineup.” 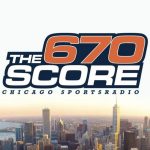 The realignment was prompted by the move in April of Bernstein's former midday partner, Leila Rahimi, to a full-time sports position at NBC-owned WMAQ-Channel 5. Rahimi will continue to make weekly “Leila Wednesday” appearances on “Bernstein and Holmes.”

Bernstein most recently has hosted solo from 9 a.m. to noon, followed by Holmes solo from noon to 2 p.m.

“I couldn't be more excited to be a part of this show," Bernstein was quoted as saying. “Laurence and I have worked closely together at The Score going back to our days on Belmont Avenue, and this new partnership promises to bring out the very best of what we do.”

Added Holmes: “I’ve been mostly a solo host for the last 15 years, and now I’m looking forward to working with Dan. We’ve got a great opportunity to challenge each other and have a lot of fun.”

Bernstein, a native of north suburban Deerfield, joined The Score as an anchor and reporter in 1995. He's been a full-time host since he began an 18-year partnership with Terry Boers in 1999. Boers retired in 2017.

Holmes, who's been on the radio since he started a talk show at south suburban Homewood-Flossmoor High School at age 16, joined The Score as part-time producer for the late overnight host Les Grobstein in 1998. He's been hosting the two-hour midday show since 2019.

In the latest Nielsen Audio survey, The Score ranked 26th in middays with a 1.3 percent share and cumulative weekly audience of 181,400.

Here is the text of Rosen’s email to staff:

We are so excited to share some exciting Score news with everyone. Starting Monday we will launch a new Score lineup and pair two of our great hosts in a new extended daypart.

Starting Monday two longtime hosts at the Score, Laurence Holmes and Dan Bernstein, will form a new partnership. Listen beginning Monday for “The Bernstein and Holmes Show” from 10 a.m. to 2 p.m. The dynamic combination of these great hosts will bring great opinions, terrific interviews, and awesome entertainment to this newly created Score show.

The creation of this new midday show gives us the opportunity to extend our awesome morning show, “Mully and Haugh,” for an additional hour – til 10 a.m.

Parkins and Spiegel will continue their powerhouse show from 2 to 6 p.m., and Gabe Ramirez continues to handle nights, starting at 6 p.m.

One other important note, Leila Rahimi remains a vital talent to our Score team and she will continue on "Leila Wednesdays" with Dan and Laurence.

The new and improved Score line-up is below.

Wednesday’s comment of the day: Michael Donovan: I'm amazed that in 2022 WLS is still using the exact same logo that landed on my desk for approval in 1974. Not that I don't have tremendous affection for that logo — after all it served the Big 89 well during some great years with Lujack, Sirott, Landecker, Little Tommy, Winston, et al. But its clunky charm might be a sign of what's ailing a great signal in a great town.