In both cases editorial standards were compromised in ways that shortchanged viewers and raised suspicions. In the end, they came off as kowtowing to teams whose owners have substantial equity interests in the networks.

On Thursday NBC Sports Chicago edited out a key sequence in the evening replay of that day’s Chicago White Sox game — one that included Tony LaRussa’s controversial decision ordering an intentional walk to a Los Angeles Dodgers batter. It resulted in the next batter hitting a three-run home run, effectively burying the White Sox and costing them the game. 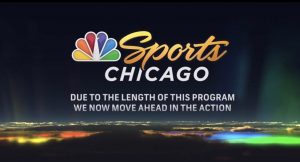 It also subjected the beleaguered White Sox manager to withering criticism — even from the network’s analysts.

But in place of the most consequential minutes of the game, NBC Sports Chicago simply skipped over it and posted a graphic that read: "Due to the length of this program we now move ahead in the action."

The network later attributed the lapse to an “error in judgment” in the process of editing the rebroadcast for “time constraints.”

On May 22 Marquee Sports Network excised a segment from “The Reporters,” a weekly sports roundtable, that included criticism of Chicago Cubs baseball operations president Jed Hoyer. During the taping, a producer ordered the panel to record the segment again — leaving out the critique of Hoyer in the retake.

In response to the ensuring uproar, Marquee Sports Network released a statement acknowledging that "a judgment was made on the fly that in retrospect was overly sensitive.” It sought to restore confidence by moving the show to a live, unedited format.

But damage to the show was done. Sun-Times sports editor Chris De Luca banned his reporters from appearing on "The Reporters," and critics decried the ethical breach as heavy-handed censorship by the network, which is co-owned by the Cubs and Sinclair Broadcast Network.

"Between NBC Sports Chicago and Marquee, there have been wayyyyy too many errors in judgment lately, each seemingly aimed at protecting their equity-partner teams from criticism," tweeted Phil Rosenthal, the former Chicago Tribune sports media columnist. "It costs the channels credibility with fans that will take some time to regain."

Friday's comment of the day: Nina D. Gaspich: With all the changes going on at WLIT, could we please hope for a new program director who will revamp the playlist for the "Holiday Lite" to include more than 15 songs? We still have five months to go before the format will kick in again!