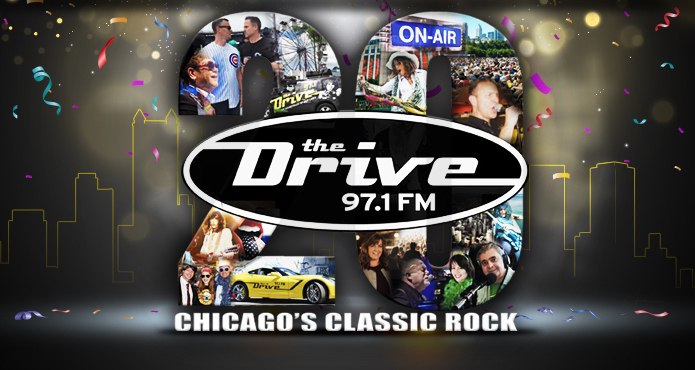 Twenty years ago today all eyes (and ears) were on a radio station in Chicago that had been stunting for weeks by airing only one artist or group each day — from Barbra Streisand to Garth Brooks to The Rolling Stones. They even threw in entire days devoted to Broadway show tunes and TV theme songs.

Listeners were left to guess what the ultimate format would be.

One month earlier Bonneville International had paid a record $165 million for WNIB, a classical music station husband-and-wife owners Bill and Sonia Florian started for $8,000 in 1955.

The big reveal turned out to be WDRV 97.1-FM, a mix of classic rock and pop hits spanning the mid-'60s to the early '80s, presented with a pledge that the station would "respect the music." It was branded "The Drive."

"The on-air approach of The Drive will avoid undue hype and radio cliches and focus on timeless rock and true variety," Greg Solk, the veteran Chicago programming executive who developed the format, declared at the time.

Despite a change of ownership from Bonneville International to Hubbard Radio in 2011 and a gradual shift to more traditional marketing and promotion methods, The Drive continues to thrive.

To kick off a yearlong 20th anniversary celebration, the station will present the complete music playlist from its opening day. Starting at 7 a.m. today, morning co-hosts Brian Sherman and Steve Tingle will air Aliotta, Haynes & Jeremiah's "Lake Shore Drive" — the first song heard on the station.

The rest of the first day's log will be replicated on the air through midnight.

"We are excited to turn back the hands of time and relive Chicago’s soundtrack from March 15, 2001, precisely as it came out of the speakers two decades ago," said Rob Cressman, who's been brand and content director of The Drive since 2016. The idea, he said, is "to recreate much of the excitement and enthusiasm that accompanied the launch.”

Joining Sherman and Tingle today will be original morning host Steve Downes, who'll share recollections of The Drive’s earliest days. Bob Stroud, the first voice heard on the station and still its popular midday personality, will follow with highlights of the past two decades.

“We look forward not only to Monday’s musical retrospective but also to the year ahead as we celebrate all that has made The Drive synonymous with Chicago over the past 20 years,” Cressman added.

In the latest Nielsen Audio survey The Drive tied for fifth place overall with a 4.4 percent share. Among men between 35 and 64 it's No. 1 with a 7.6 share.

Since 2017 Solk has been brand manager and operations director of WXRT 93.1-FM, the Entercom adult album alternative station that turns 50 next year.

Friday's comment of the day: Janet Davies: Mark Giangreco is one of the most talented people with whom I have worked. Quick-witted, highly intelligent, humorous and professional. He has always kept me on my toes to keep up with him. In person, Mark is beyond kind - supporting his friends and colleagues in so many ways the public does not see. Having had him beside me on parades, auto shows, golf shows and most importantly New Year's Eve has been a treasured part of my career. Mark is an imp, a pro, a creative creature who will always nudge the envelope just a bit. In these days of encroaching blandness . . . he is not cookie-cutter!