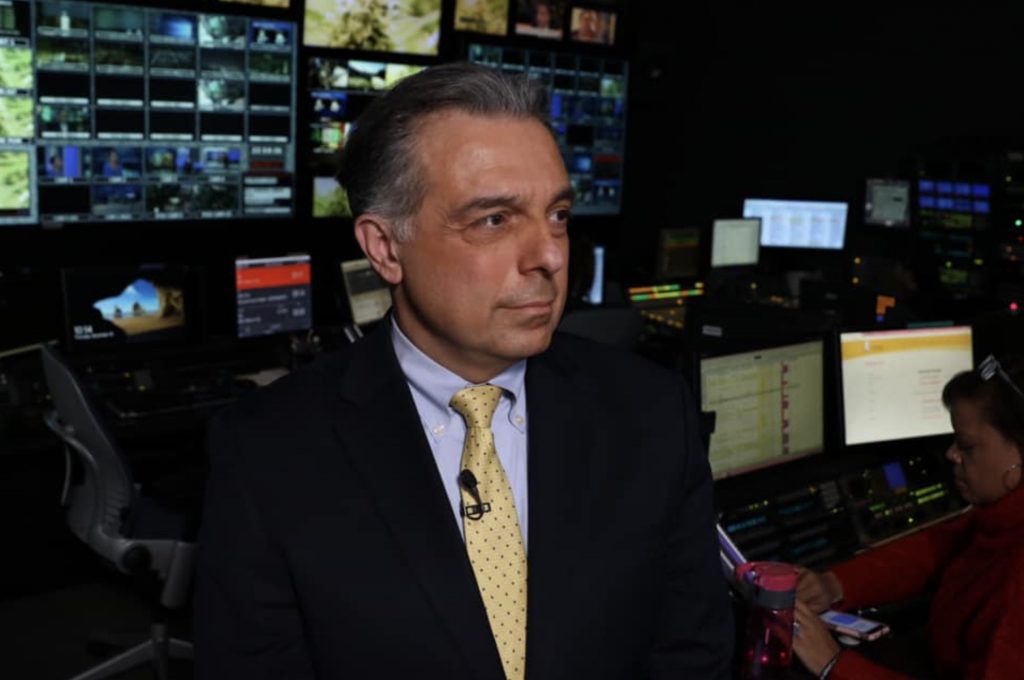 After two decades as WBBM-Channel 2’s "smart, eloquent and creative storyteller," Vince Gerasole is leaving the TV news business for a higher calling.

The CBS-owned station stalwart will sign off in mid-August to join the Archdiocese of Chicago as director of multimedia content, according to an announcement Wednesday by Cardinal Blase J. Cupich, archbishop of Chicago.

“The Archdiocese is full of rich inspirational stories, and I'll be helping Cardinal Cupich and the team develop new ways with audio and video to bring them to the faithful on a daily basis,” Gerasole told me. “This is especially important now that so many are unable to get to church because of COVID-19.”

In a letter to his CBS 2 co-workers, Gerasole expressed his gratitude and respect: "There are many facets to journalism, from those bringing us closer to a work of art to those that speak truth to power and seek to right wrongs," he wrote. "My hat is off to my brave colleagues who continue to forge ahead at a time when their work is increasingly maligned but needed more than ever."

Jim Williams, the veteran CBS 2 news anchor, spoke for many when he said: “Vince is a smart, eloquent and creative storyteller. He finds that one nugget that enhances his reports. And he’s been an important voice in our newsroom — always thoughtful, always eager to help his colleagues. We’re going to miss him."

Gerasole, 58, a Pittsburgh native and graduate of Northwestern University’s Medill School of Journalism, joined CBS 2 in 2001 as a general assignment reporter from WSB, the ABC affiliate in Atlanta. But it wasn't the first time he'd worked at station.

While pursuing his master's degree at Medill, Gerasole served as an intern with Pam Zekman, the legendary investigative reporter. Just last month Gerasole organized a virtual tribute to Zekman after her job was eliminated at CBS 2.

Gerasole proved adept at anchoring as well as covering breaking news, soft features and everything in between, earning him a total of 14 Emmy Awards from the Chicago/Midwest chapter of the National Academy of Television Arts and Sciences. In 2006 he received the Dante Award from the Joint Civic Committee of Italian Americans.

"We moved into this fancy pants Daley Plaza location at WBBM in 2008, but for me the times I will cherish most are the days I spent at that leaky old building on McClurg Court," he told me. "You could still feel the energy there everyday from when WBBM was changing the way newsrooms across the country approached broadcast journalism.  Boy, have I been lucky to be a part of that team."

Here is the text of Gerasole’s letter to CBS 2 colleagues:

Things are changing in my professional life. A meaningful and unexpected opportunity has come my way to work with The Archdiocese of Chicago and, among other things, help people fill the spiritual void they may be experiencing during the COVID – 19 crisis. The Archdiocese is not only a faith home, but one of the city's largest social service providers, and I am honored to join the team.

It means that, after much thought and in a few weeks, I’ll be signing off from my 33-year career as a broadcast journalist. I’ve been lucky enough to have worked in so many rewarding situations, from covering my hometown of Pittsburgh, to seeing government in action as a Washington Correspondent, and anchoring the afternoon news in my adopted home of Chicago. Those who know me best know my favorite moments, without a doubt, were the years I spent covering features and food at WBBM. I often refer to this period as the time I chronicled the lives of whistling postmen and tap-dancing nuns. At the end of the day those were the stories and people viewers remembered most. Their life journeys often inspired others to take chances, pursue their passions, and find joy in life. Each one brought countless joy to my own.

Though work in a TV newsroom can be grueling, (and I was often too quick to remind friends and family of that,) it was also infinitely rewarding. Each day I met someone new, and in telling their story I had the opportunity to learn something from the path they traveled, and the hurdles they worked to overcome.  There are many facets to journalism, from those bringing us closer to a work of art to those that speak truth to power and seek to right wrongs. My hat is off to my brave colleagues who continue to forge ahead at a time when their work is increasingly maligned but needed more than ever. Thank you to our News Director Jeff Harris, our GM Derek Dalton and the entire CBS 2 family, for letting me join you in your mission. The care and dedication you've shown in our recent crisis is commendable. A part of me will always miss being there with you and I wish you the best.

PS — I'll be around for a bit longer and we will be able to say our goodbyes.

Wednesday’s comment of the day: Ken Soens: How sad that once again more jobs are being cut in Chicago. How can you wish anyone well in their future endeavors when there is no place to find a job in the third largest market in the country? NBC Sports Chicago cutting jobs is just another example throughout the industry of weakening local employment opportunities in media.