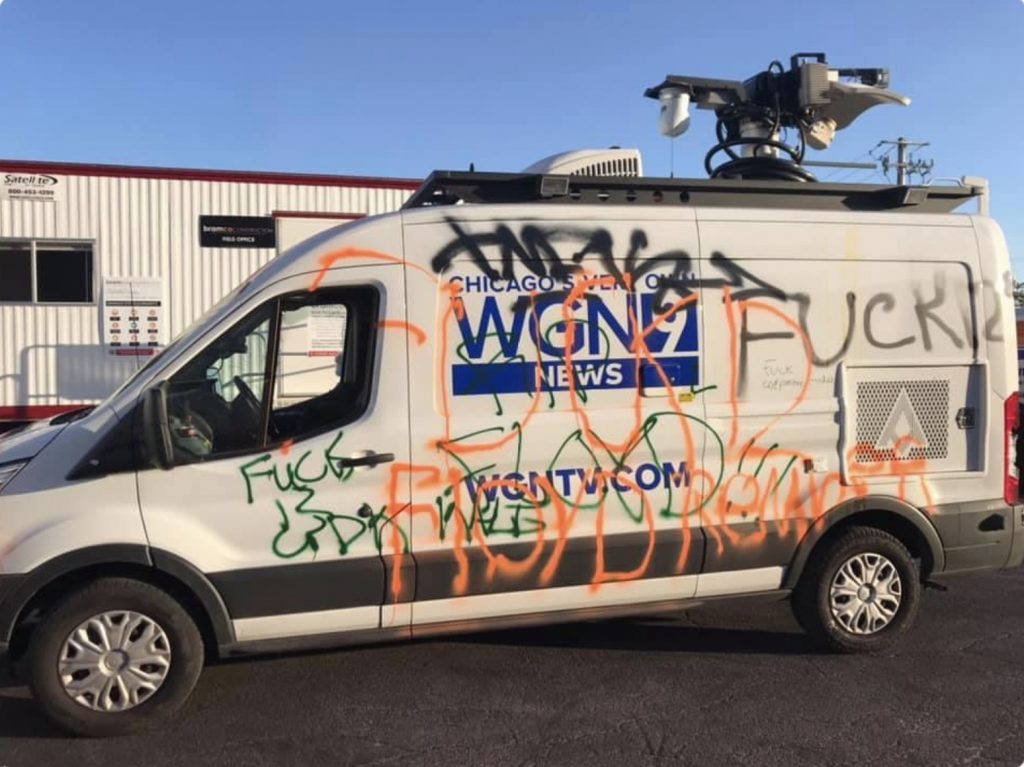 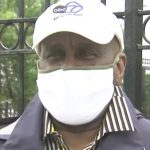 The hazards of journalism became all too real this week for TV news crews in Chicago. Ken Bedford, a photographer for ABC-owned WLS-Channel 7, was attacked from behind and knocked to the ground while he was covering the aftermath of looting in Chicago's South Shore neighborhood. "It was very volatile. I've covered a lot of protests and marches and we've never become part of the story," said Bedford, 70, who's been a photojournalist for ABC 7 since 1972. He said he fell forward and injured his elbow and knee. A news crew from NBC-owned WMAQ-Channel 5 was reporting on a community coming together to help a business that had been looted when a camera was stolen from its truck — despite the presence of a security guard with the reporter and photographer. The camera later was seen in videos posted on social media. Several other news trucks were vandalized in the disturbances, including the one pictured here from Nexstar Media Group WGN-Channel 9. NABET, the union representing broadcast technicians, issued a warning to its members to stay vigilant and safe. 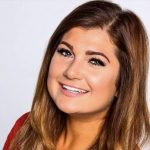 Lexi Sutter, a reporter for NBC 5, stunned viewers Monday during a live shot from a peaceful demonstration in Chicago's Lakeview neighborhood. "One thing that I think is important to note is that you will see a lot of these people out here that are protesting are not colored people. They are white people that are saying we are fed up," she said. A visibly shaken Sutter later apologized on the air and on Twitter, writing: "I misspoke in my earlier live report & used a term that was wrong. I make no excuses. I failed. I was trying to convey the group protesting was one of ALL races & instead I offended many. I'm sorry." Sutter joined NBC 5 as a general assignment reporter in 2018 from ABC affiliate KNXV in Phoenix. 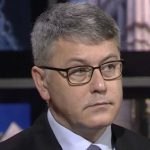 It was quite a surprise to hear Steve Daniels, senior reporter for Crain's Chicago Business, as a guest Tuesday on Nexstar Media Group news/talk WGN 720-AM. Earlier this year WGN publicly severed ties with Crain's over a story that speculated on a possible sale of the station. Now WGN bosses are saying they never issued a ban on using Crain's reporters on the air. "We just got out of the daily or weekly business thing they did," one insider said. Since February Crain's has been airing its weekly business reports on Chicago Public Media WBEZ 91.5-FM.

Although this year's Chicago Pride Parade has been canceled, that isn't stopping ABC 7 from celebrating. In lieu of covering the parade — as it has for the past 16 years — ABC 7 will produce a one-hour special hosted by Janet Davies and Terrell Brown. "ABC 7 Celebrates Pride: Fun and Fabulous" will air June 28 at 4 and 11 p.m. “We didn’t want the pandemic to rain on our parade for Pride month so we kept the tradition going with a fun and entertaining prideful hour of television," said executive producer Hank Mendheim. "We also wanted to pay tribute to past and present people in the community who have made a difference.” The special will be dedicated to Chicago LGBTQ+ first responders battling the pandemic. 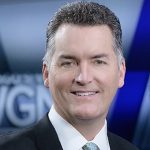 Joe Donlon, top news anchor at WGN-Channel 9, shared some personal thoughts Tuesday on his promotion to anchor of Nexstar Media Group’s upcoming “News Nation” nightly national newscast on WGN America. “Two years ago, I dropped every fear and took a chance,” Donlon wrote on Facebook. “I accepted a job with WGN and moved our family to Chicago. Despite the uncertainly swirling around our world, I’m about to drop every fear again and take another chance. . . . As I take this next step, I can’t stop thinking of the millions of people who are out of work. That includes the talented journalists who are facing furloughs, layoffs, and buyouts. The magnitude of what is happening right now is not lost on me. I lived it in 2008. I carry that experience with me every day. To those of you struggling, hang in there. It’s not easy. Do whatever it takes and prepare for the next chapter. Believe that things will get better.”

Tuesday’s comment of the day: Chad Rubel: Joe Donlon did his best to fit in at WGN. He will be better suited for this news experiment. I hope they get more time to make this work than Carol Marin's incredible news experiment at Channel 2 about 20 years ago. [It lasted] about nine months.