Steve Cochran didn’t know until after he got off the air Friday that it was his last show on WGN 720-AM. So he wasn’t able to thank his loyal listeners — until now.

"The morning show at WGN was the highlight of my career,” Cochran told me Sunday in his first comment since his abrupt departure. “To follow Wally [Phillips], Bob Collins, and Spike [O’Dell] has been an honor, and I want to thank that incredible audience for all the support. I’ll miss connecting with them everyday.”

Although his ratings were the highest they’d been in years and he still had another year to go on his contract, Cochran was cut from the Nexstar Media Group news/talk station for reasons that were never made public. Sources said he clashed with Sean Compton, the Nexstar executive vice president who’s been overseeing WGN since September.

Starting January 6, Cochran will be succeeded from 5 to 9 a.m. Monday through Friday by Bob Sirott, the legendary Chicago broadcaster who previously co-hosted middays on WGN with his wife, Marianne Murciano, from 2013 to 2015, and hosted “The Noon Show” on WGN from 2007 to 2010. 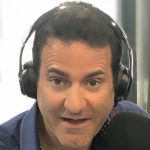 In the interim, weekend host Pete McMurray will fill in as morning host for the next two weeks (except for Christmas Eve when David Plier will fill in and Christmas Day when WGN will air classic Christmas episodes from the golden days of radio).

It's not clear where Cochran may turn up next or how soon he can do so. A fixture on Chicago radio since 1993, he spent 10 years at WGN in a variety of shifts before he was forced out by previous management in 2010. He returned as morning personality in 2013.

For now fans will have one more chance to see Cochran before the end of the year. He'll again host "Steve Cochran’s New Year’s Eve Comedy Show," billed as "the show for people that can't stay awake until midnight."

Along with Mike Toomey of WGN-Channel 9's morning show and Chicago comedians Tim Walkoe, John de Cosse and Tim Benke, Cochran will take the stage at 1 p.m. December 31 at the Raue Center in Crystal Lake. (Here is the link for tickets.) Then they'll all take the stage again at 7 p.m. December 31 at the Tivoli Theater in Downers Grove. (Here is the link for tickets.)

Added Cochran: "I won't miss the 3 a.m. alarm but I'll really miss that incredible audience and the people I worked with every day. So until I pick you up in my Uber, Merry Christmas and happy holidays to everyone."