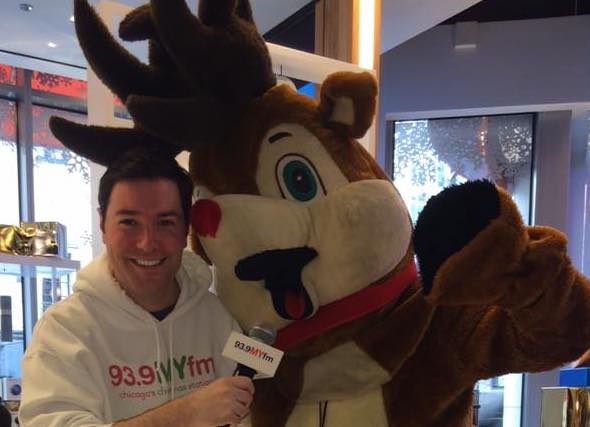 Mick Lee and Edison the Reindeer

The calendar says it's November 6, but for one Chicago radio station, this is Christmas Eve.

At 4:35 p.m. Tuesday, holiday music will begin airing around the clock for the 17th consecutive year on WLIT FM 93.9, the iHeartMedia adult contemporary station known as 93.9 My FM.

“With all the turmoil in the world today, we felt Chicago needed a little more Christmas right now,” Matt Scarano, president of iHeartMedia Chicago, said in a statement. “The extension of the Christmas music season will allow Chicagoans to get into the Holiday spirit even more this year."

Last year the switch to Christmas music came on November 10. The earliest it has happened was November 2 in 2006 and 2007.

The biggest reason for the move, of course, is ratings. In Nielsen Audio figures released last week, WLIT was languishing in 22nd place overall with a 2.2 percent audience share in October. If history holds, it’s certain to be No. 1 by this time next month.

“It’s the most wonderful time of the year and we’re so happy that millions of Chicagoan’s choose to make 93.9 My FM part of their families’ annual holiday traditions,” Mick Lee, the station’s program director and afternoon personality, said in a statement. “In our 17th year as ‘Chicago’s Christmas Music Station,’ get ready for lots of fun holiday surprises in the coming weeks.”

Research shows it’s not just older listeners who love the stuff. A Nielsen Music report published by AllAccess.com found that 36 percent of holiday music fans are millennials (18 to 34) — the largest of any generation. Gen X (35 to 54) made up 31 percent, while baby boomers and beyond (55 and older) comprised only 25 percent.

Here are the top-played holiday songs on radio in 2016: