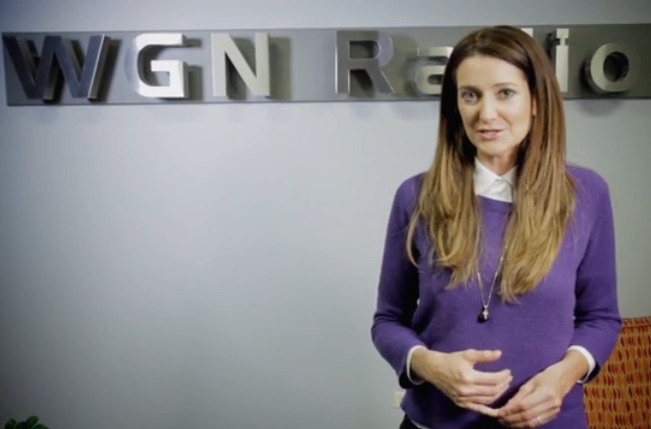 The former Chicago television news anchor will hold forth with Conn from 3 to 7 p.m. Monday through Friday, starting March 16, according to Todd Manley, vice president of content and programming at the Tribune Media news/talk station.

"It's been amazing to be part of the ‘Steve Cochran Show’ and the WGN team,” Davlantes said in a statement Monday. “I’m looking forward to setting the alarm a tad bit later, and joining Roe in afternoons, helping him build on what's already been a great start at WGN. Many thanks to Larry Wert, Jimmy deCastro and Todd Manley for this opportunity."

Davlantes, a Chicago native and Northwestern University Medill School of Journalism graduate, spent nine years as a reporter and weekend news anchor at NBC-owned WMAQ-Channel 5, followed by four years as a news anchor and host of “Good Day Chicago” at Fox-owned WFLD-Channel 32. She left Fox 32 in October 2013 to pursue other projects.

Conn has been in the market for a sidekick since he started on WGN January 26. Besides Davlantes, others who sat in with him included Sylvia Perez, another former Chicago television news anchor, and Amy Guth, host of WGN’s weekend “RedEye Remix” and general manager/publisher of RedEye Chicago and the website Metromix.

At Cumulus Media news/talk WLS AM 890, where he spent 25 years on the air, Conn worked with four co-hosts, including Richard Roeper, Cisco Cotto, Bill Leff and Garry Meier.

Conn said he welcomed the addition of Davlantes to his afternoon ensemble.

“I’ve known Anna personally and professionally for a long time,” he said. “I'm a huge fan and really lucky the circumstances were right for her to be available for us in the afternoons. Between Anna, [news anchor] Judy Pielach, [sports reporter] Connor McKnight and [traffic reporter] Esmeralda Leon — not to mention a surprise or two yet to come — we're building a dream team. I feel like Theo Epstein with better luck and maybe better hair. . . . OK, not better hair.”

Since she joined WGN last October, Davlantes has been responsible for delivering “The Big Story” — 90-second reports on trending topics drawn from social media — at the bottom of each hour during Cochran’s show. Those duties are expected to be assumed by morning news anchor Andrea Darlas.

"Anna and I have been friends for years, which says how lucky I am and raises questions about her taste,” Cochran said. “I love having her with me every morning, but to stay with us and take her next step in TV she needs to join Roe, and with that she can focus even more on her favorite job, being a great mom to her daughter, Gabby.”

In the latest Nielsen Audio survey, WGN tied for 20th in afternoons with a 2.3 percent share and cumulative weekly audience of 271,700. The survey included only three days of Conn’s show.