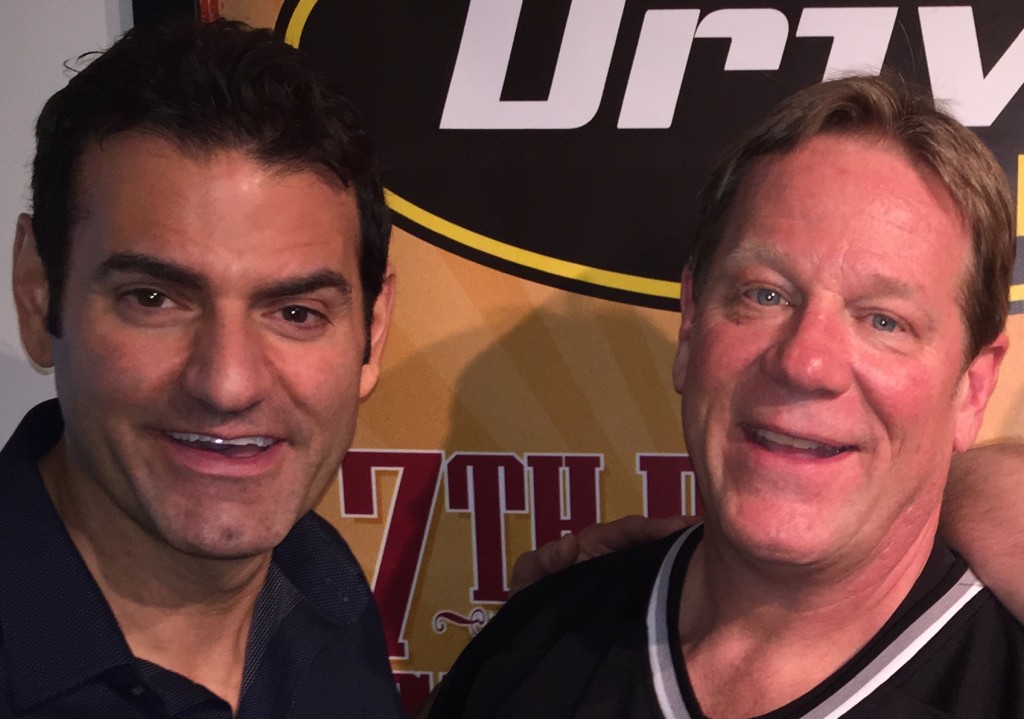 Hubbard Radio Chicago bosses formally introduced McNeil and McMurray to the staff Tuesday and officially announced that the duo would succeed Steve Downes, who’s retiring after 14 years as morning personality on The Drive.

“We are all very excited to bring two well-known Chicago personalities together with one iconic rock brand,” John Gallagher, vice president and market manager of Hubbard Chicago, said in a statement. “The Drive has maintained a dominant classic rock position in the market for many years. The departure of Steve Downes offered us the opportunity to reevaluate our mission and once again bring something unique to mornings.”

McNeil joins The Drive after a 30-year run in sports/talk radio, most recently as midday co-host at CBS Radio WSCR AM 670, where he chose not to renew his contract last year. After 17 years on Chicago radio, McMurray joins The Drive from Tribune Media news/talk WGN AM 720, where he hosts evenings. McMurray said his last day on WGN will be Thursday.

No start date has been announced for what’s unofficially been called “The McMorning Show.” The station said only that it would debut "in early March.”

In Nielsen Audio figures released Tuesday, The Drive tied for 10th place in mornings with a 3.0 percent share and cumulative weekly audience of 379,800.

Here is the text of the press release from The Drive:

PETE McMURRAY AND DAN McNEIL TO TAKE OVER “MORNING DRIVE” AT 97.1 THE DRIVE WDRV CHICAGO

Dan McNeil has been arguably the biggest sports radio host in Chicago for the past 25 years, hosting at both Chicago sports stations WSCR and ESPN 1000. When McNeil was asked to comment on his move to mornings on one of Chicago’s premiere FM outlets, McNeil said “I’ve coveted a show like this for a long, long time. That it’s coming to a reality on The Drive—the crown jewel of Chicago radio, is incredible. I’m enormously grateful because my real life again is exceeding the dreams I had for it. It’s like an NFL player, late in his career, signing with the Patriots looking for those last few shots at a championship ring.”

When pushed on the fact that he’s only known as a “sports guy” McNeil replied “There’s more to me than point spreads and pucks and my listeners know that. In high school, I loved classic rock and wrote music for the paper. I was William Miller in ‘Almost Famous,’ front and center at the Amphitheatre or Hammond Civic Center for Rush or Cheap Trick—mini notepad in one pocket and a half pint in the other. I’ve been to more Alice Cooper shows than college basketball games. I think any doubters will come on board after digesting my classic rock resume.”

Pete McMurray comes to The Drive after nearly two years at WGN Chicago, where he most recently held the 7pm-11pm show. McMurray came to Chicago in 1998 and has worked at the former WCKG, WLUP and WKQX. Pete is also very visible on T.V. in Chicago, working on Chicago Bears “pregame shows on Fox as well as T.V. 24/7 on NBC. “I loved every single moment working with Jimmy, Todd, Cochran and the entire WGN family,” McMurray states. “However, I couldn’t pass up the opportunity to work for one of the top rock stations in the country-the legendary WDRV and Hubbard Broadcasting, one of the most respected broadcast companies in America. Not to mention alongside Danny Mac, someone I have admired from afar my entire career. It’s going to be a ton of fun and a great, great drive!”

John Gallagher, Hubbard Chicago, VP/Market Manager comments: “We are all very excited to bring two well-known Chicago personalities together with one iconic rock brand. The Drive has maintained a dominant classic rock position in the market for many years. The departure of Steve Downes offered us the opportunity to reevaluate our mission and once again bring something unique to mornings.”

Greg Solk, Sr. VP/Programming for Hubbard adds “14 years ago, The Drive launched with a more music presentation that filled a void in the crowded Chicago market. The evolution of The Drive continues today with Pete McMurray and Dan McNeil in the all-important morning drive slot. We built this station and achieved market dominance on a foundation of music. And now we’ll be presenting a unique show that features great rock with two local guys who will combine their love of music with their passion for all things Chicago. Pete and Dan will deliver a relevant show that will resonate with Chicago morning commuters, enhancing FM radio’s connection to listeners who demand great local content in an increasingly crowded media landscape.”

The show is set to debut in early March. A morning show producer is expected to be announced shortly. The new show will be under the direction of WDRV Program Director Curtiss Johnson.