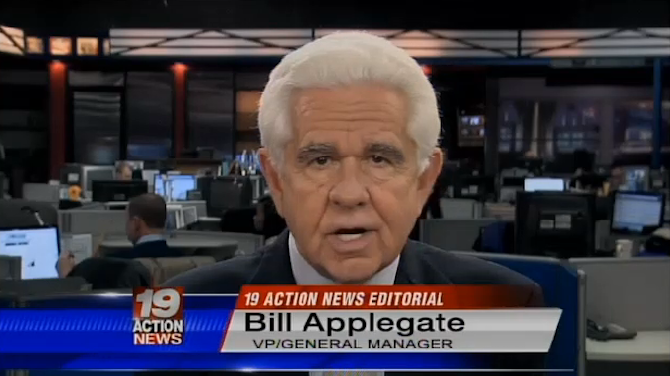 You’d have to go back more than 20 years (and six general managers) to recall the last time WBBM-Channel 2 was No. 1 in the ratings at 10 o’clock.

I thought of that the other day when I read that my old friend Bill Applegate was retiring after 45 years in broadcasting. While he’s spent the last 13 years running a couple of stations in Cleveland, he left an indelible mark on Chicago during two tours of duty here.

From 1983 to 1985, Applegate was news director of WLS-Channel 7. Together with Dennis Swanson, who was named general manager of the ABC-owned station soon after Applegate arrived, they engineered the most spectacular turnaround in local television history, transforming a last-place laughingstock into a model news operations that would dominate the market for more than a quarter-century.

(Not all of Applegate’s ideas were winners: His experiment in deploying 30-year-old newcomer Oprah Winfrey as an afternoon news anchor alongside Joel Daly crashed and burned after just three weeks.)

In 1990, Applegate returned to Chicago as vice president and general manager of Channel 2. Then, as now, the CBS-owned station was an also-ran in the ratings at 10 p.m. Just before he left three years later, it was in a tie for first place.

How did he do it? Bold, brash and wickedly brilliant, Applegate was willing to try almost anything to draw a crowd. He sent millionaire anchorman Walter Jacobson, disguised in beard and tatters, out on the street as a homeless man. He “suggested” that his female anchors ditch their tailored suits in favor of tight-fitting silk blouses. He ran nightly lottery drawings during the news, punctuated with flashing lights and pulsating music. And above all, he emphasized stories about crime, sex and celebrities ad infinitum.

“If we are going to maintain an audience base for local television news in this coming 100-channel environment of the ’90s, then we have got to experiment with modifications to the classic newscast format of the past,” he told me early in the decade. “We have to push on to find an information form that is interesting enough and compelling enough to attract new audiences. We have to take risks, and we have to accept the slings and arrows of our critics.”

Sure enough those arrows came flying — many with poison tips. Jacobson, who quit CBS 2 to join Fox-owned WFLD-Channel 32, called Applegate “a purveyor of garbage.” Former CBS 2 reporter Jim Avila, who went on to network fame, decried Applegate’s “style of crime and sensational news,” adding: “Channel 2’s reputation and standards were purposely and systematically destroyed by [his] tabloid cabal.”

But damn if it didn’t work. From flashy graphics to hyperkinetic story counts, the rest of the market couldn’t copy CBS 2’s style fast enough. “Bill Applegate has forced all of us to reevaluate what we’re doing,” Peter Walker, then-general manager of Tribune Broadcasting WGN-Channel 9, said when Applegate left to run KCBS-TV in Los Angeles in June 1993.

By all accounts, Applegate, 67, hasn’t mellowed much in the intervening two decades. His in-your-face management style at Raycom Media's WOIO-TV and WUAB-TV in Cleveland is matched by the hard-hitting station editorials he still delivers on the air, holding local politicians’ feet to the fire and inviting viewers to respond.

Although widely credited with transforming his stations into a local powerhouse, he’ll be leaving under a cloud thanks to a lawsuit filed last month by a former station sales employee accusing management of creating a sexually hostile work environment. Applegate, who was named in the suit, denied the allegations.

In a memo announcing his retirement in April, Applegate called his years at Raycom “the highlight of my career,” adding: “I am immensely proud of our management team at WOIO/WUAB and all of our colleagues here who have contributed to our great success.”

Applegate said he and his wife Kathy will move to Fort Myers, Fla., where they own a home.