The station was WLUP AM/FM 1000/97.9, its biggest stars were Jonathon Brandmeier, Steve Dahl, Garry Meier and Kevin Matthews, and the man at the center of it all was a brash 35-year-old executive named Jimmy deCastro. After eight years as ringmaster of the Loop, he was openly gunning for top-rated WGN AM 720.

“We’re taking on ’GN to a certain extent,” deCastro told documentary producer Tom Weinberg as cameras rolled. “I would say that most of WGN’s audience is so old that I don’t think there’s going to be a lot of comparative listening. Sixty-some-odd percent of WGN’s audience is over 50 years of age. . . . I have a lot of respect for ’GN. They’re the old guard. The Loop is the station on the horizon.” 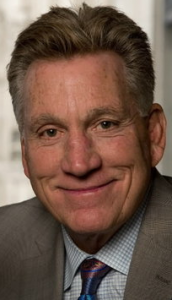 Today deCastro is president and general manager of WGN, where he’s leading a renaissance of the Tribune Broadcasting news/talk station with the same energy and passion he brought to the Loop a quarter-century ago. And today WLUP is just another spot on the FM dial. Let the exquisite irony sink in.

The 5½-minute YouTube excerpt above is from “Radio Faces,” a one-hour documentary that aired Jan. 25, 1989, as part of John Callaway’s “WTTW Journal” series on WTTW-Channel 11. It profiled more than a dozen radio personalities and executives with unusual candor and intimacy. (Disclosure: I served as project consultant on the documentary.)

“‘Radio Faces’ captures Chicago radio in all of its variety and competitive complexities,” the Tribune’s Rick Kogan wrote in his review. “Its camera is probing and active, its subjects articulate and amusing. The insights one gains from this hour go beyond the faces behind the mikes. . . . [I]t gives a sense of the business itself, as full a portrait as one could imagine getting in an hour.”

What few could have predicted then was how radically radio was about to change — and all for the worse. As deCastro and other entrepreneurs led the charge for consolidation, stations were bought and sold like commodities, creating behemoths like Clear Channel that would suck the life out of everything. “Radio Faces” became an epitaph for an age.

"We knew it was timely when we produced it, but like lots of our documentaries, they can be even more relevant many years later,” Weinberg reflected the other day. “With all the stories and subjects, it's completely unpredictable. We had no way of knowing that it was the end of an era in radio when we did this. That's part of the fun."