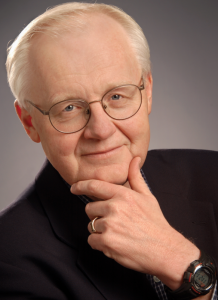 For nearly 15 years, Mark Elfstrand inspired thousands of listeners each day as the warm and friendly morning host at Christian talk WMBI FM 90.1. But he may have delivered his most inspiring message after his run at the Moody Radio flagship station ended.

“Radio is not who I am,” Elfstrand wrote on his blog Monday. “My identity is not wrapped up in being a radio personality. . . . Our work should never define us as human beings. God created in each of us something much greater. The Creator of all things has made every human being in His image. He doesn't stamp us with a job title. He gives us His divine imprint.”

The day before Thanksgiving marked the end for Elfstrand as host and executive producer of WMBI’s morning show. Also cut from the show, airing from 5 to 9 a.m. weekdays, were news director Dave Mitchell and senior news correspondent Monte Larrick. (Mitchell continues at CBS Radio all-news WBBM AM 780, where he has worked as a news anchor and traffic reporter since 1992.)

"After many months of prayer and discussions regarding the future of the morning show in Chicago, Moody Radio's leadership decided that it was time for a new direction," Collin Lambert, vice president of Moody Radio, said in an online statement. "The population in Chicagoland is rapidly changing, which presents an opportunity for a wider, more diverse ministry in order to reach more people with God's Word."

Starting early next year, the new morning show will focus on "reaching a multicultural audience and will feature co-hosts, news and information delivered in a conversational manner, caller and guest interaction, social media integration and much more.”

Praising Elfstrand, Mitchell and Larrick as “respected in the industry and in this community,” Lambert told me: “Mark, Dave and Monte were the ultimate professionals — Mark and Dave for 14 years, Monte for 32 — delivering the daily program that we asked them to. They served the Lord and Moody Radio well.”

By noncommercial radio standards, Elfrand’s show was unquestionably successful. In the latest Nielsen Audio survey, WMBI tied for 20th place in mornings with mainstream music stations WJMK FM 104.3 and WLIT FM 93.9. With a 1.9 percent share and cumulative weekly audience of 192,800, the show’s numbers doubled from the same period last year.

A 35-year radio veteran who came to Chicago by way of Sacramento, Dallas and Pittsburgh, Elfstrand took the latest news as the seasoned pro he is.

“Make no mistake, here,” he wrote. “I ENJOYED it! Radio is a wonderful line of work. The connection to people from all walks of life . . . travel . . . the opportunity to be creative and use your gifts . . . are all such a blessing. But radio can also be a very transient line of work. Most of us in this business have experienced changes in station ownership, management, and formats at some point. . . . The radio management team where I've served in Chicago recently decided to make a change in morning programming. Like most changes, ‘in with the new and out with the old.’ Marketing impact is always made with ‘new and improved.’ That's usually how I came to get my jobs!”

Elfstrand’s influence went beyond his on-air work. As “Mark Johnson” at KNCO AM in Grass Valley, Calif., he inspired a young Darren Davis to get into the business. “My dad owned a bakery, and we would take donuts to Mark and his partner ‘Uncle Sunny’ and watch them do the morning show,” Davis recalled. “I fell in love with radio right then and there.” Today Davis is executive vice president and general manager of national programming platforms for Clear Channel Media + Entertainment.

Added Lambert: “Please rest assured that there are things that will NOT change — our commitments to exalt Christ, provide solid biblical information, bring a Christian worldview to current issues, play inspiring, theologically sound music and to be a trusted voice and friend during good times and bad.”