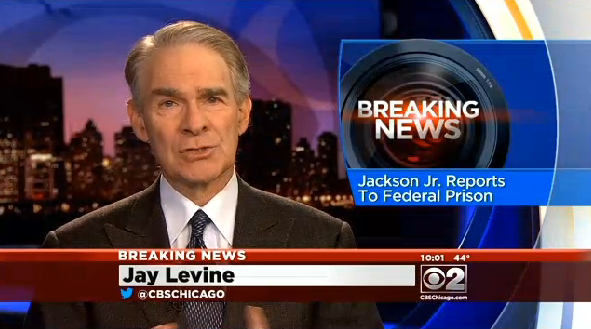 WBBM-Channel 2 wasn't the only station to lead its 10 o'clock newscast Monday with the "breaking news" that Jesse Jackson Jr. had reported to prison earlier that day. Others jumped the gun based on inaccurate information, too.

But the CBS-owned station's version included especially vivid detail of the former congressman's ordeal that veered toward the sensational.

In his report on what he called "today's simple, quiet surrender," CBS 2 chief correspondent Jay Levine interviewed the station's legal analyst, Irv Miller, who said: "[Jackson] was given his sheets, he was given his clothes, he was searched, and he was forced to do a body cavity search, which is the most demeaning thing that could happen to an individual."

As we later learned, that never happened Monday. Jackson was turned away when he tried to surrender, and wasn't able to begin his 30-month sentence at Butner Federal Correctional Complex in North Carolina until Tuesday morning.

So was the description of the "body cavity search" a fabrication? Or was Miller speaking hypothetically to Levine, who failed to provide context for the statement?

I reached out to Levine and to a CBS 2 spokeswoman for an explanation. On Tuesday afternoon, I received the following response directly from Miller:

"Did I specifically know what happened to the former congressman last night during my interview on CBS 2? Of course not. Only today, did we learn he was not processed. What I meant to convey is my knowledge of what typically happens when people report to federal prison. I presumed that standard prison policy was followed yesterday when I made those statements and I assume what I described then happened this morning," Miller wrote.