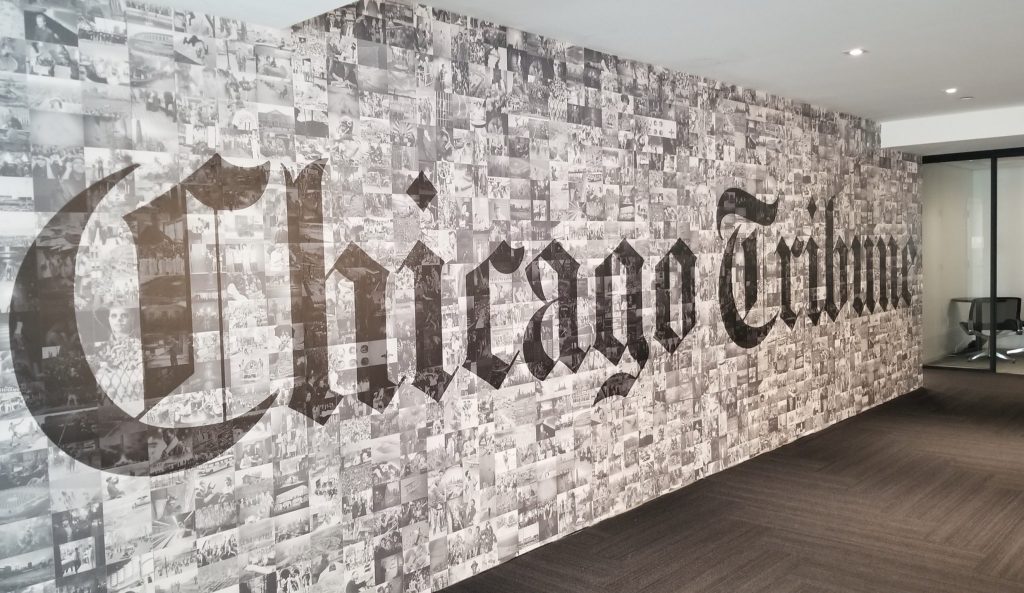 Despite ominous warnings about what's ahead under new corporate owners Alden Global Capital, the Chicago Tribune is closing out the year on an upbeat note from its top editors.

With the latest addition of four newsroom staffers and the announcement of 120,000 exclusive digital subscribers, Tribune publisher and editor-in-chief Bruce Dold said the newspaper is poised to continue creating "meaningful journalism" in the face of growing challenges in 2020. END_OF_DOCUMENT_TOKEN_TO_BE_REPLACED 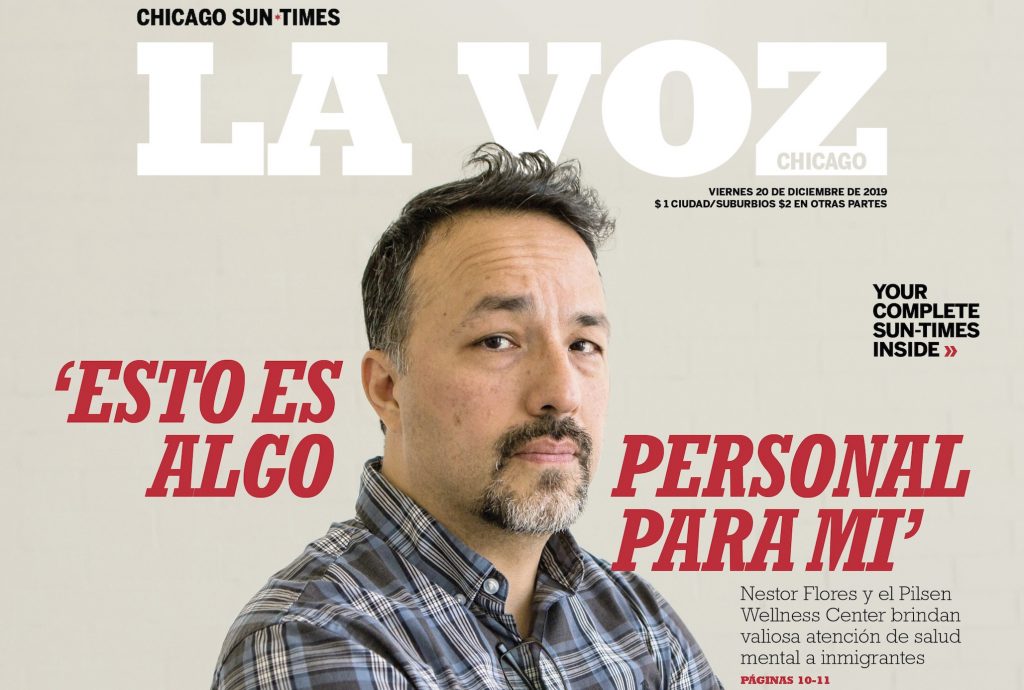 With the demise of Tribune Publishing's Spanish-language weekly Hoy, a newcomer is hoping to fill the void. On Friday the Sun-Times will publish La Voz ("The Voice") Chicago, a Spanish supplement wrapping around the regular paper. Featuring Sun-Times news and sports stories translated from English along with some original content, it's being labeled an experiment for now. "The idea is to test how our content appeals to Spanish-speaking readers and then reach out to stakeholders in the Latino community — and advertisers more generally — to see if there’s a product we can build sometime next year," Sun-Times Media interim CEO Nykia Wright and editor-in-chief Chris Fusco wrote in a letter to readers Tuesday. "We know Univision, Telemundo, La Raza, the Daily Herald’s Reflejos newspaper and others all serve Spanish-speaking people, and we respect the work those news organizations do. But the passing of Hoy seems like an opportunity for us to engage Latino readers, listen to what they want and potentially add a new voice into the mix." END_OF_DOCUMENT_TOKEN_TO_BE_REPLACED 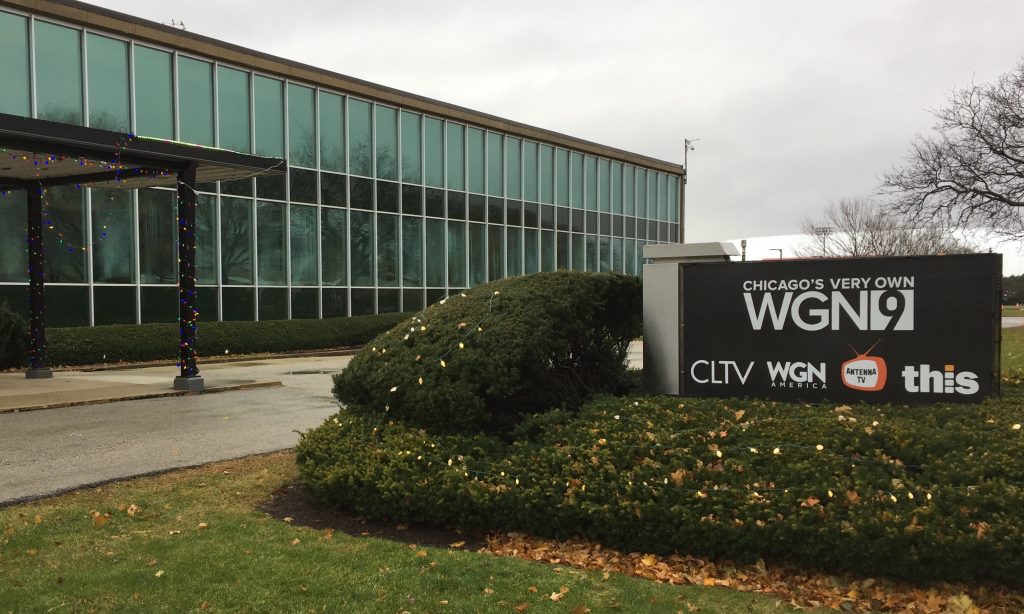 CLTV, the 24-hour local cable news channel launched as Chicagoland Television on New Year’s Day 1993, is shutting down at the end of the month, Nexstar Media Group announced Monday.

Although said to be marginally profitable, the operation never achieved its full potential as “Chicagoland's source for local news, weather and traffic” and eventually was eclipsed by other cable networks, digital news sources and social media platforms. END_OF_DOCUMENT_TOKEN_TO_BE_REPLACED 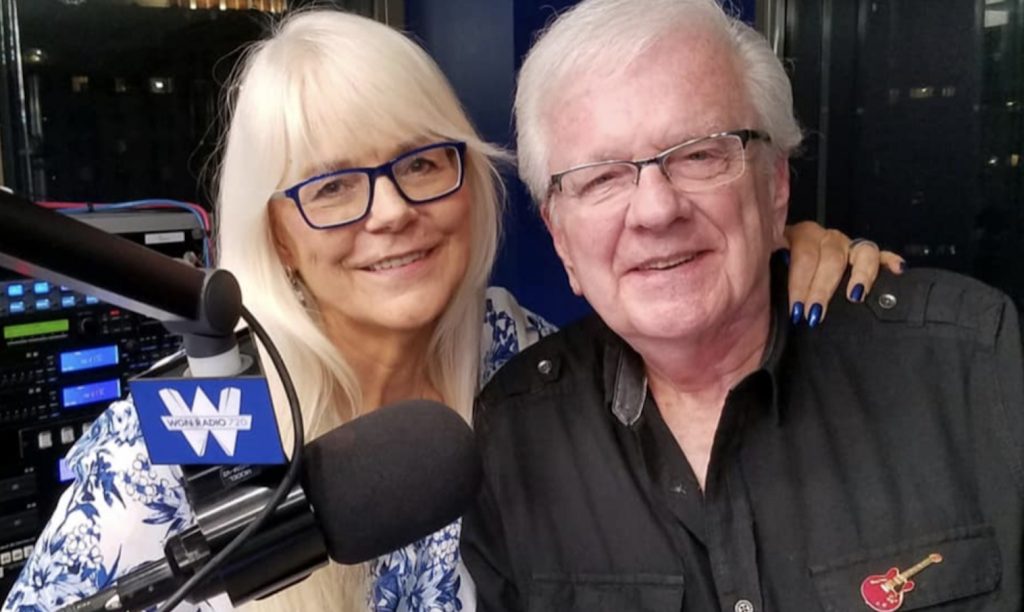 Fans of Steve King and Johnnie Putman will have several opportunities to reconnect with the husband-and-wife team on Nexstar Media news/talk WGN 720-AM. Once again they'll host their annual New Year's Eve show on December 31. Among guests on the 25th anniversary broadcast of "Steve & Johnnie’s Cheap Date Life After Dark New Year’s Eve Extravaganza" from 11 p.m. to 5 a.m. will be musical mentalist Sidney Friedman and the River Road Trio. They'll also be filling in on WGN for Roe Conn from 3 to 7 p.m. on December 27 and for Justin Kaufmann from 7 to 11 p.m. on December 30. Earlier they filled in for Kaufmann on Black Friday. King and Putman, who drew top ratings for WGN on overnights for more than 26 years, retired in 2011 and were inducted in the WGN Walk of Fame in 2015. They now live in Florida. END_OF_DOCUMENT_TOKEN_TO_BE_REPLACED 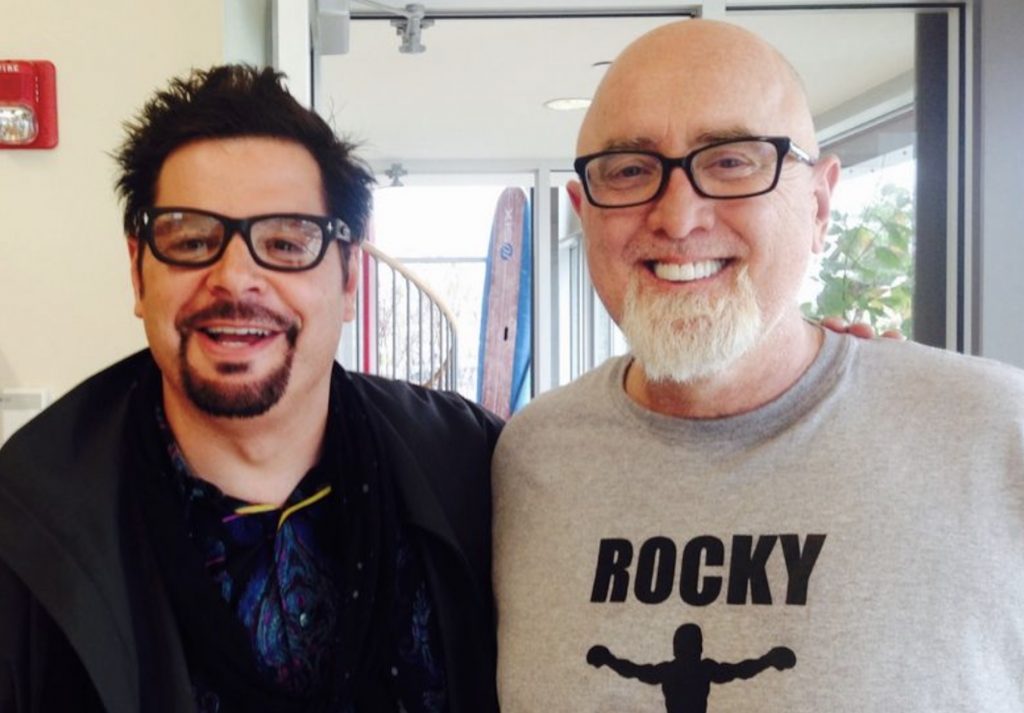 James MacDonald, the embattled former pastor of the Harvest Bible Chapel megachurch, is suing Chicago radio personality Erich Mancow Muller for branding him a “con man” and allegedly fabricating stories about him on the air. 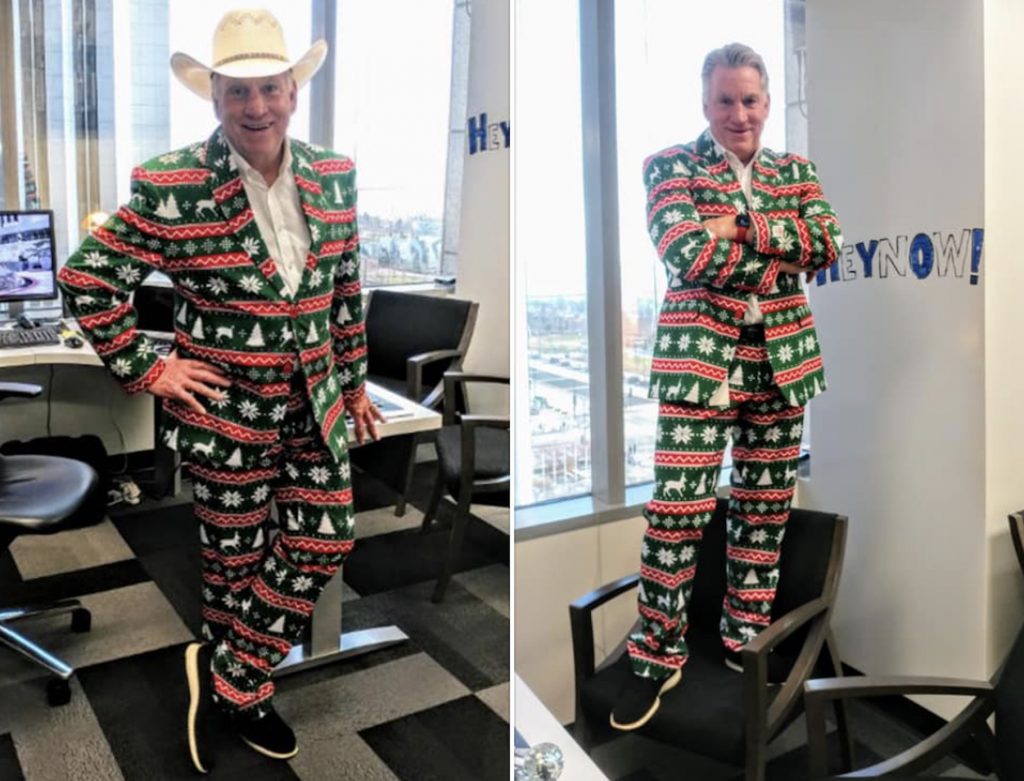 Whether he's coming or going, Jimmy de Castro always puts on a good show. To mark his last day on the job as senior vice president and market manager of Entercom Chicago, the legendary Chicago radio impresario showed up in holiday attire that would make Santa blush. "It ain’t over til we say it’s over!," de Castro posted on Facebook wearing the getup. At a farewell staff meeting Thursday he stood in front of a screen depicting himself in the suit astride a black horse, presumably riding off into the sunset. Although he's calling it quits after two years in the top job, de Castro is expected to continue as consultant for Entercom and launch a new venture involving sports betting and gaming information. He may be leaving the broadcasting business for now, but one thing's for sure: No one will ever call The Deacon shy and retiring. END_OF_DOCUMENT_TOKEN_TO_BE_REPLACED 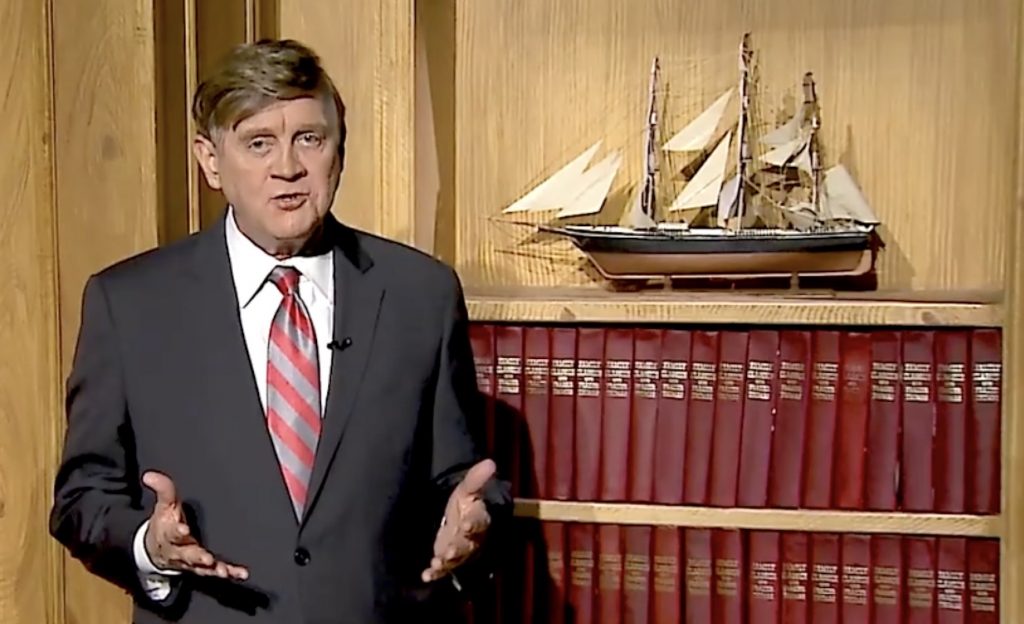 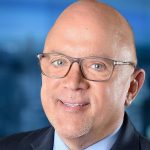 In the eons since WGN-Channel 9 first raised the curtain on "Family Classics" in 1962, the iconic movie series has had only three hosts — Frazier Thomas, Roy Leonard and Dean Richards. Until now. Steve Sanders, veteran news anchor at "Chicago's Very Own," was pressed into service at the last minute after Richards took a spill and had to miss Monday's taping. So when WGN presents the Irving Berlin classic "Holiday Inn" at 7 p.m. Friday, it'll be Sanders (in place of Richards) introducing and hosting the film. As for Richards, he suffered a fractured wrist and facial abrasions after he tripped on a pothole and struck his head on the pavement Sunday outside Water Tower Place. "I definitely wasn't camera ready," joked Richards, who's back on the job as entertainment critic at the Nexstar Media station. END_OF_DOCUMENT_TOKEN_TO_BE_REPLACED 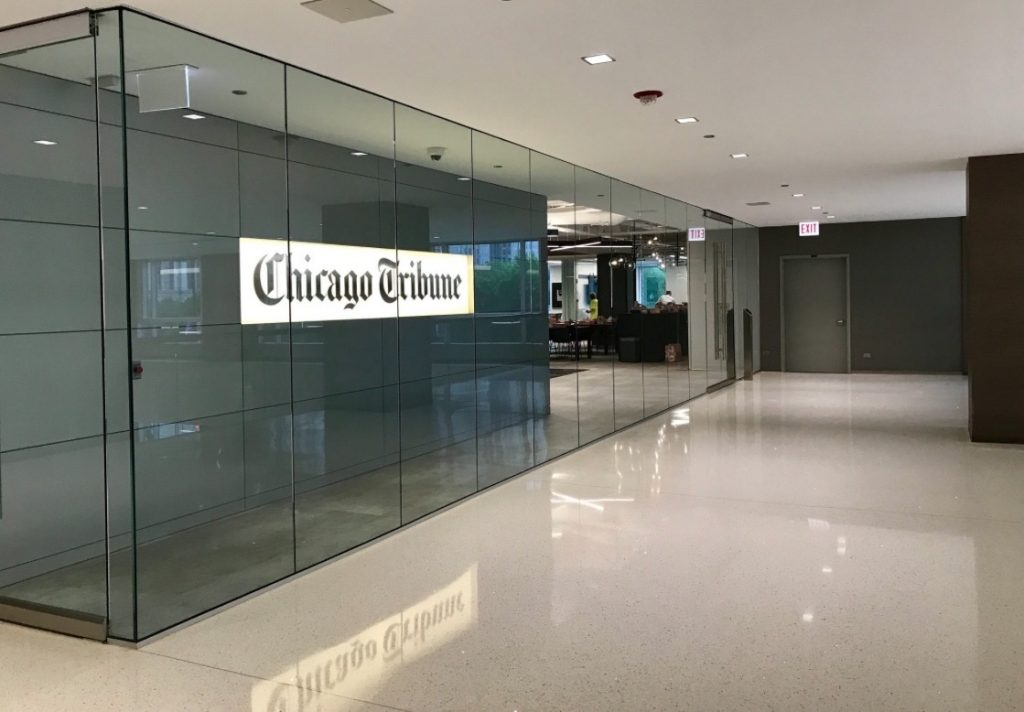 The unions representing editorial employees at the Chicago Tribune and other Tribune Publishing newspapers are speaking out against their company's new largest shareholder.

In a formal petition made public today, the Chicago Tribune Guild urged the board of Tribune Publishing to push back against Alden Global Capital, the New York-based hedge fund that just acquired a 32 percent stake in the company. It cited Alden's "troubling record of diminishing newspapers’ abilities to cover their communities" and its reputation for destroying newspapers by cutting newsroom staffs. END_OF_DOCUMENT_TOKEN_TO_BE_REPLACED 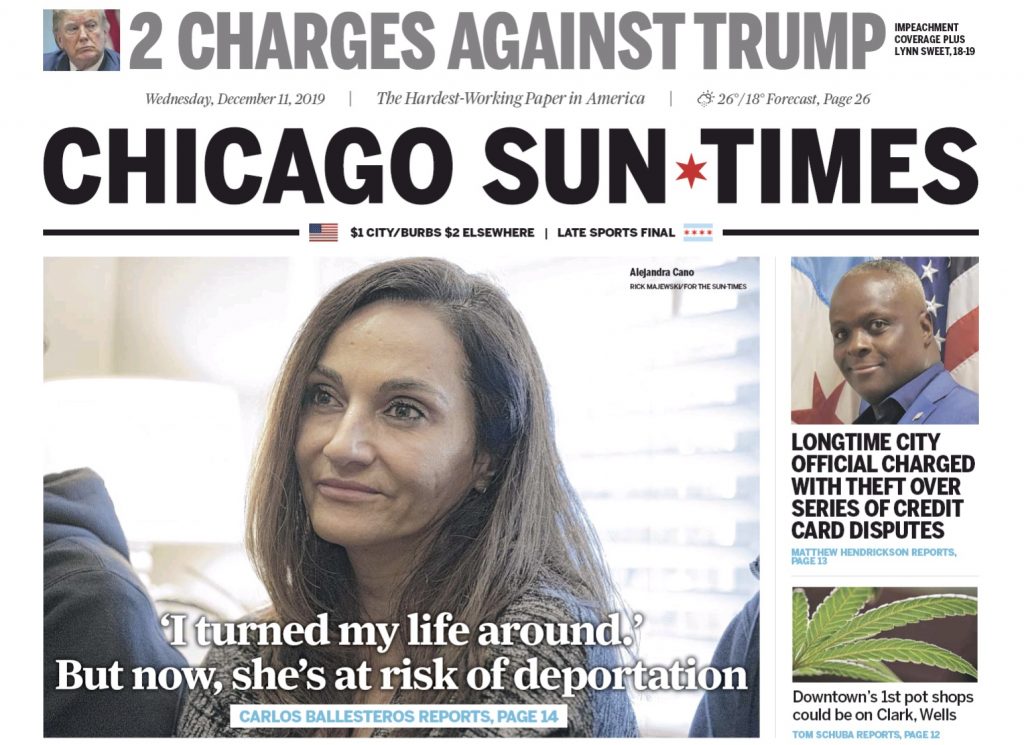 The Chicago Sun-Times signed a new lease on life this week by extending its printing and distribution agreement with the parent company of the Chicago Tribune. 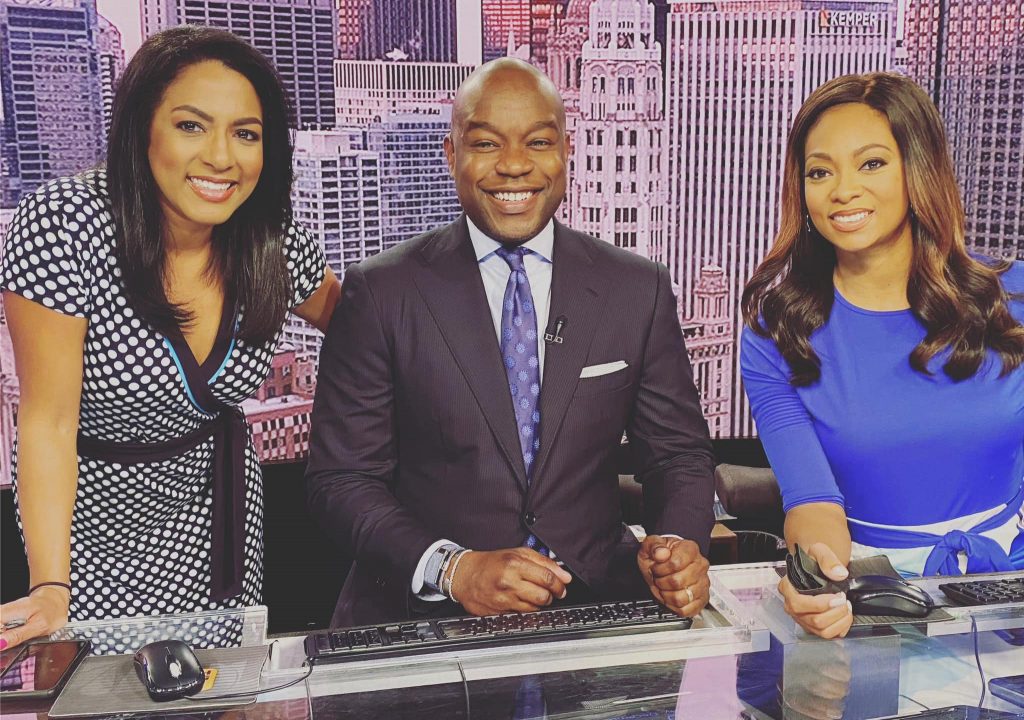 Yes, that was Siafa Lewis co-anchoring the weekend morning news Saturday with Michelle Relerford (and meteorologist Alicia Roman) on WMAQ-Channel 5. It was a first for the NBC-owned station's lead sports anchor. "I’m not leaving the sports chair," said Lewis, who joined NBC 5 from WNBC in New York in 2014. "This is just me seeing if I can expand my horizons. I’m multi-faceted, pretty eccentric and I hate being placed in a box." He's the latest Chicago sportscaster to try his hand at news, following Ryan Baker, Corey McPherrin and others. Frank Whittaker, station manager and vice president of news at NBC 5, said Lewis might turn up on the news desk again. "We’ll be giving opportunities to several of our people who’ve expressed interest in growing their skills," Whittaker said. There's an anchor opening on weekend mornings since Susan Carlson was cut back to reporting three days a week. END_OF_DOCUMENT_TOKEN_TO_BE_REPLACED