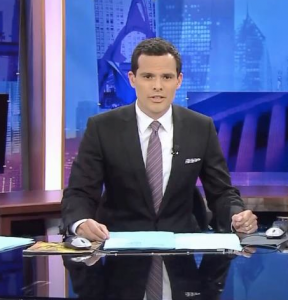 Dan Ponce, son of one Chicago news anchor and brother of another, will now have an anchor chair of his own.

After three years as a general assignment reporter at WGN-Channel 9, Ponce has been promoted to Monday-through-Friday morning news anchor at the Tribune Broadcasting station. Starting Sept. 3, he'll anchor "WGN Morning News" alongside Erin McElroy from 4 to 6 a.m. weekdays. The move coincides with the expansion of the broadcast to six hours — airing from 4 to 10 a.m.

"News, music and humor — there's only one newscast in the city where I can do all three," Ponce said after signing a new long-term deal with the station Thursday. (Terms were not disclosed.) "I'm thrilled to be joining Chicago's most popular morning TV team. It's going to be a big adjustment waking up that early, but anchoring with Erin McElroy every day will make it well worth it."

News director Greg Caputo made it official in a memo to staff:

"Since joining us three years ago, Dan has excelled in his ability to handle live television," Caputo wrote. "His natural sense of ease in the midst of the chaos that often surrounds breaking news has been an asset to our newscasts. During these years, Dan has shown ever-increasing skill and ease behind the desk each time he filled in as an anchor on our newscasts. His ability to communicate with authority is well-matched with his natural warmth with people. Dan is a Chicago native who understands the news rhythms of our city. As we build up the early morning news block, I’m confident that Dan’s addition to this team will set the stage for continued improvement and growth."

Founder of the world famous a cappella group Straight No Chaser and a graduate of Indiana University and the Medill School of Journalism at Northwestern University, Ponce previously was a general assignment reporter at ABC-owned WLS-Channel 7 and a news anchor and reporter at WILX-TV in Lansing, Mich. He joined WGN in September 2010.

Frank Holland, who has been anchor the early morning hours of WGN Morning News since 2011, will shift to afternoon reporting and backup anchoring.

"In his two years with us Frank has proved to be a gifted writer and caring newsman," Caputo wrote. "He has often enterprised his own stories requiring him to work long days after an early morning start to make sure the story was done well. By becoming a member of the afternoon/evening team, Frank’s storytelling strength will provide the kind of coverage WGN News viewers expect."

Larry Potash and Robin Baumgarten will continue as co-anchors of "WGN Morning News" from 6 to 10 a.m.